Blessings Along "The Way" - Part 5

We had been used to waking up to lovely sun and blue skies and today our morning was overcast, no rain at least for now so we made sure our rain gear was in our daypacks – rain poncho and rain pants, just in case.

A grey day on the Camino

We also noticed that there were a lot more walkers in the morning and we saw the group of girls from Ireland who were in front of us, and of course I had to photo-bomb their group photo. I also took a photo of all of them to make up for my silliness.

The day continued to be overcast, making the air heavy with humidity. As we were walking, Charlotte was behind me listening to her music, I heard a cuckoo like you hear in a cuckoo clock. I stopped and Charlotte caught up to me and she listened and heard the cuckoo singing as well. She thought maybe it was coming from a farm clock and the windows were open, but we looked at the time and it was not a time when a cuckoo clock would be cuckooing. I had no idea that cuckoo birds lived in this part of the world. This was a blessing from Nature to hear a cuckoo in the wild.

We continued walking along farmland, meadows and forests of Eucalyptus trees. It was also obvious that this area got a great deal of rain as the banks along the trail was covered in moss and ferns.

We decided to stop and I needed another part of a soda, as we had been walking through farm land full of cows and the smell had gotten to me again. Charlotte decided to treat herself to
some lunch and I just opted for French fries (les pommes de terre frites) as we still had a few miles to walk and I did not want to get sick. 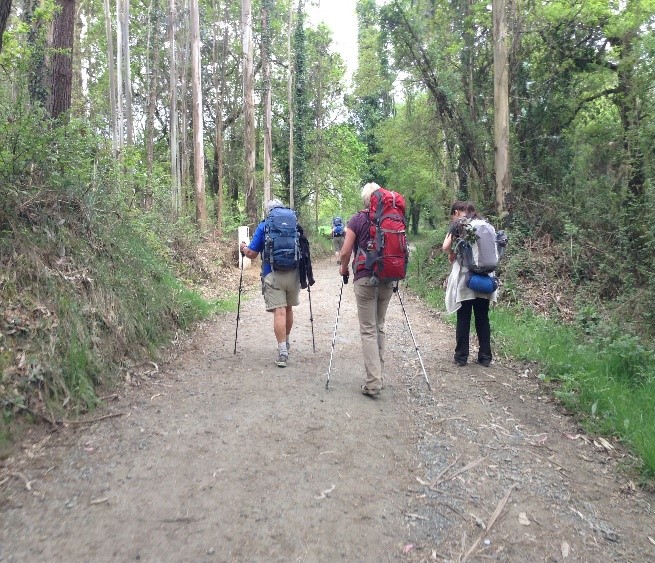 As we approached Rua, we found ourselves hearing traffic and road signs letting drivers know to look out for Pilgrims as well as signs for Santiago.

Back and forth between forests and roads, I decided it was time to get out our directions for Hotel Restaruante O Pino, Rua. According to our directions this is a small and charming rural hotel and is located on the right-hand side of the St. James Way. After we pass the chapel and Santa Irene hostel, descend through a eucalyptus forest, we will have reached the medieval village “A Rua”. Just at the entrance to the village, next to a fountain, turn right, and after 100 meters we will find our accommodations. Now, how difficult could this be. Well, this is where our amazing blessing of the day occurred.

The weather had changed and it was misting and the temperature had dropped. We came out of the eucalyptus forest and there on the right were some stone buildings that may have been something a long time ago. There was no fountain, so we kept walking.

We walked up to the main road that lead into town, crossed the main road back into a forest to see a young woman walking our way that we had met a few days earlier. We asked her if she had seen anything like our directions and she shared, she was staying in the main town of Rua, she had not turned left so we had walked to far. If we kept going, we would eventually be in Santiago and that was the destination for tomorrow.

Turning around we headed back to where we had come from. As we were walking there was an elderly man pushing a wheel barrow, so I asked if he spoke English, he said no, so I showed him the name of our accommodations. He motioned for us to follow him and at the spot where the old stone buildings were, we saw the fountain and the sign. When we had walked past the first time, the area was filled with cars parked on the side of the road hiding the fountain and the sign, so we had missed it. I was slowly learning to look everywhere for signs.

Seeing our accommodations, we headed down the road and found the gentlemen we had met on our first day of walking were there, as well as the ladies from the US. 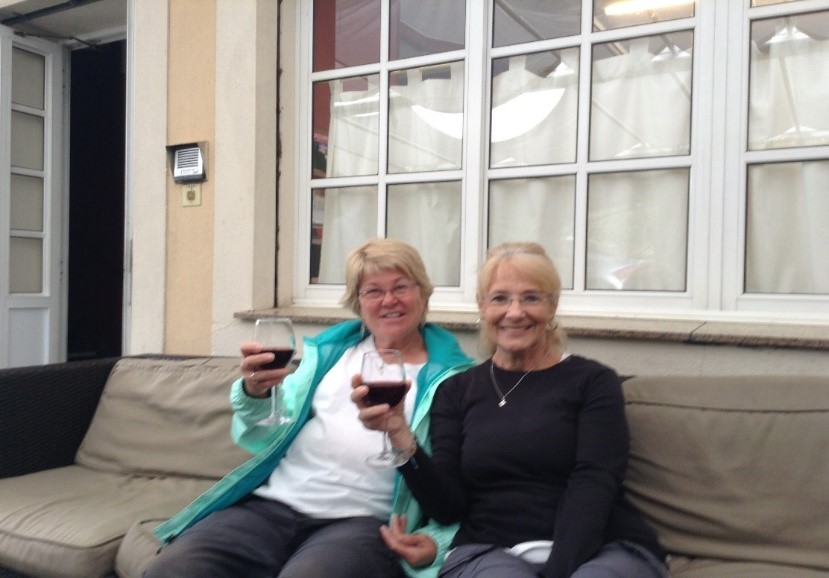 A lovely glass of wine and a delicious dinner ended our next to last day on the Camino, as tomorrow it was Santiago.

Read the next & final stage here, or go back to the start of Sandi's Camino diary here, and for more information on walking the Camino de Santiago, visit Macs Adventure's website.