Alsace, which is located in the the north western part of France on the border of Germany is a real mix of both cultures, where Romanesque and Baroque villages combine with undulating landscapes to form one of its most scenic regions. The villages are truly mesmerizing with their bold coloured half-timbered houses, car-less cobbled streets and historic centres. Walk on the wooded slopes of the Vosges Mountains and on vineyard tracks through wineries galore on our Alsace Wine Route tour.

Macs Adventure has created trips for you which highlight the best hand-picked accommodations and some of the best walks in the region. We have been sending guests to Alsace since 2012, so if you have a penchant for travelling to this very distinctive region of France, we can give you great tips and advice.

Perhaps you don't have long to linger and would therefore enjoy our Alsace Wine Route Short Break on which you walk from village to village. Stay in pretty Ribeauville  and walk through Kayserburg, voted as "France's Favourite Village" in 2017. This area enjoys a unique microclimate and nearby Colmar is France's driest town. If you are lucky and walking on a clear day you will be able to see all the way to Germany's Black Forest. These tours are simply great for wine and history buffs. The wine here has been honed to perfection over several hundred years and evidence of its history over millennia is here for all to see, especially its ruined castles, many of which you will see on your daily walks. So round up some friends or family and off you go! 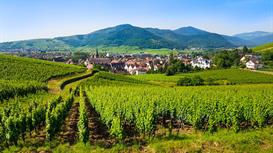 16 Reviews
Walking the Alsace Wine Route
Walk from the village of Thannenkirch to Eguisheim, one of the ’Plus Beaux Villages de France’
From £910.00
More Info 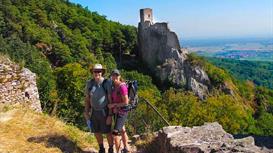 16 Reviews
Alsace Wine Route Short Break
Walk from the village of Ribeauvillé to Eguisheim on this short break itinerary
From £550.00
More Info