Umbria is known as the green heart of Italy and has rolling hills, fields of sunflowers, olive groves and vineyards producing amazing Sagrantino wines. From the visually stunning hilltop town of Spoleto, to the birthplace of St Francis, Assisi, Umbria’s old-world traditions have been kept alive due to this region having no sea or country borders. Whilst the towns you visit are vibrant and fun, there is also a sense of tradition with many ancient architectural and artistic treasures to behold.

Why not take our Umbria: Trails to Assisi walking adventure? From Spoleto, your starting point, you can see your final destination of Assisi perched on Mount Subasio with the sweeping plains below. Begin to get excited about what comes between; constant views to the Apennine Mountains, Etruscan, Roman and medieval history galore and pretty towns offering exquisite cuisine and wines. If you wish, you can combine Umbria with Tuscany, on our Treasures of Tuscany and Umbria tour, which offers walking in both regions.

Macs Adventures has been offering walking tours in Umbria for many years and you will definitely have an exquisite experience in this authentic area of Italy. Staying in delightful hand-picked accommodation in small towns that are bursting with culture and history, you are sure to have a fun and meaningful adventure. Practice your Italian on some unsuspecting local who will be more than happy to help with directions or advice! 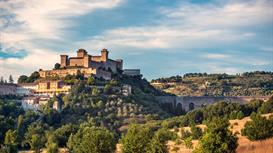 6 Reviews
Umbria: Trails to Assisi
Walk through Umbria, the green heart of Italy, from Spoleto to Assisi.
From £860.00
More Info

6 Reviews
Umbria: Trails to Assisi Short Break
Take a short break in Umbria, the green heart of Italy walking from Montefalco to Assisi inn to inn.
From £515.00
More Info 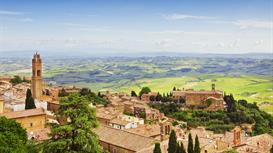 6 Reviews
Treasures of Tuscany & Umbria
Walk from medieval and Renaissance hill top town of Tuscany and to Umbria, the green heart of Italy
From £1,230.00
More Info 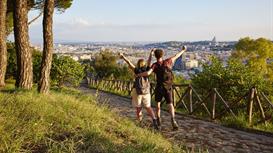 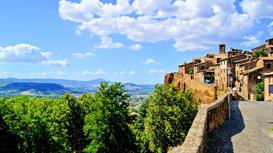 8 Reviews
Orvieto to Rome
Walk through classic Italian landscapes from Orvieto to Rome following the ancient Via Francigena
From £845.00
More Info