Peace of Mind Booking Guarantee
67
Adventure of the Week: Secret Trails of Ibiza and Formentera
Do you have any questions?
Call us on +44 141 530 5452
Contact a specialistLive Chat
Written by

Adventure of the Week: Secret Trails of Ibiza and Formentera

Explore the natural beauty of Ibiza, far away from the "party island" scene which it is often known for. The Secret Trails of Ibiza and Formentera will open your eyes to a quiet but wonderfully authentic side to the Island, where you will step back in time to the sleepy retreat which it was traditionally known as. You can expect walks which take you past hidden coves, enjoy an afternoon swim in the turquoise waters of the Mediterranean sea, and relax with a lazy lunch by one of its many beaches. You are spoiled for choice when it comes to food, with grilled Seafood and Paella a popular choice by the locals. 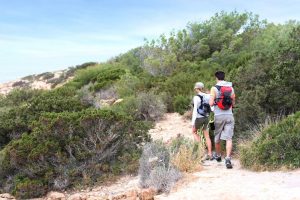 Distance: You can go up to 87km on this trip, but since there are some loop walks involved, if you are not feeling up to walking each day, you can take it a bit easier.

Grading: We have created this trip to be Easy to Moderate.  The average daily distance is 13km, with one longer walking day up to 21km. However, there is plenty of places to stop along the route so you can really go at your own pace. We wanted this trip to be a balance of great walking, with plenty of opportunities to relax, immerse yourself in the culture and soak up the gentle pace of the Island. 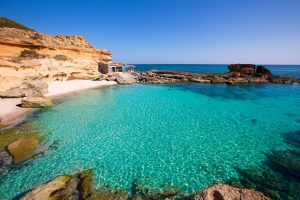 Plenty opportunities to swim in the clear blue waters

The trip begins in the North Eastern region of Ibiza. This area is the most unspoiled, where inviting paths lead you through pine forests, farm tracks and beach cafes. The tour starts with 2 nights in the small village of Sant Carles de Peralta with a pretty 18th century whitewashed church at its center, it is a laid back haven with a distinctly bohemian vibe.  Travelling further afield you have 3 nights at Sant Joan de Labritja, and 2 nights at Sant Miquel de Balansat before setting off by ferry to its exclusive neighbor Formentera. Formentera is only accessible by ferry from Ibiza, which has been a blessing, it remains largely unspoiled and idyllic. Your last few days are spent relaxing by the beaches of this little Island Paradise! 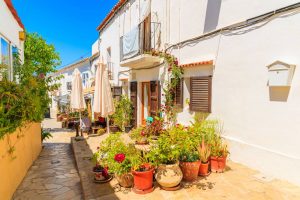 Meander through the sleepy villages

Ibiza has built up a reputation of being simply a partying destination, which is so far from true. It is a walkers paradise if you are willing to get off the beaten path and explore further North to its hidden gems . What better time to visit than now? When the island remains unspoiled, yet so culturally rich. Ibiza has been known as the "White Isle" however your walks will be dominated by vast colors of greens, and blues as you walk through pine forests, and rich olive groves with the turquoise waters never too far in the distance.  Enjoy strolling through the green countryside passing pretty farmsteads accompanied only by the sound of chirping birds. This trip is great for walkers of all abilities, the terrain is relatively easy going with gentle ascents and descents following good coastal paths and farmland tracks. You will be rewarded with an abundance of beach cafes and delightful accommodation, with many offering a swimming pool to soak after a long day's hike. Then there is Formentera, the perfect way to finish this trip moving at an even slower pace than Ibiza.

The scenery is spectacular, from its transparent clear water, to its craggy volcanic shores, fields of golden barley, and towering pine forests. The expanse of water between Ibiza and Formentera are part of the Salinas National Park which is a UNESCO world heritage site due to its prairies of "seaweed fields" which explains why its water is so beautifully clear. It's rustic and relatively unmanned beauty makes it a charming little island perfect for switching off from the world, and embracing your inner zen. 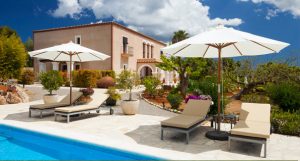 The Secret Trails of Ibiza and Formentera is easy to get to and easy to get around. There is only one airport in Ibiza, which is serviced by many low-cost carriers from around Europe and UK. Coming from outside Europe, we would recommend flying via one of the major European hubs such as Amsterdam, Madrid or Paris. This is a well balanced 10 night tour with some great inclusions such as accommodation in boutique hotels and agritorismos, arrival and departure taxi transfers as well as a return ferry between Ibiza and Formentera. If you are short on time, have a look at our 7 night Secrets Trails of Ibiza trip. If you have any questions about exploring the Ibiza, get in touch with our team on info@macsadventure.com, and they will be more than happy to answer any questions you may have.