Adventure of the Week - Via Francigena

The Via Francigena is an ancient pilgrimage route that, since medieval times, has connected Canterbury in the southeast of England to Rome. Macs Adventure's take on the Via Francigena begins in the heart of the Alps on the Swiss border before taking pilgrims on an exhilarating tour through the unique Italian regions. With BBC2 currently showing The Road To Rome, we thought that we should highlight our expertise on this glorious route.

The full Italian Via Francigena is an epic 50-day trip that although not as well known as the Camino de Santiago in Spain is considered by some to be Europe's best pilgrimage route due to the variety of scenery and regions visited along the route. In addition to the full pilgrimage, we have split the Via Francigena into 8 sections which can be combined or completed individually. Read on to discover how each stage offers a different and beautiful experience of the Via Francigena Pilgrimage. 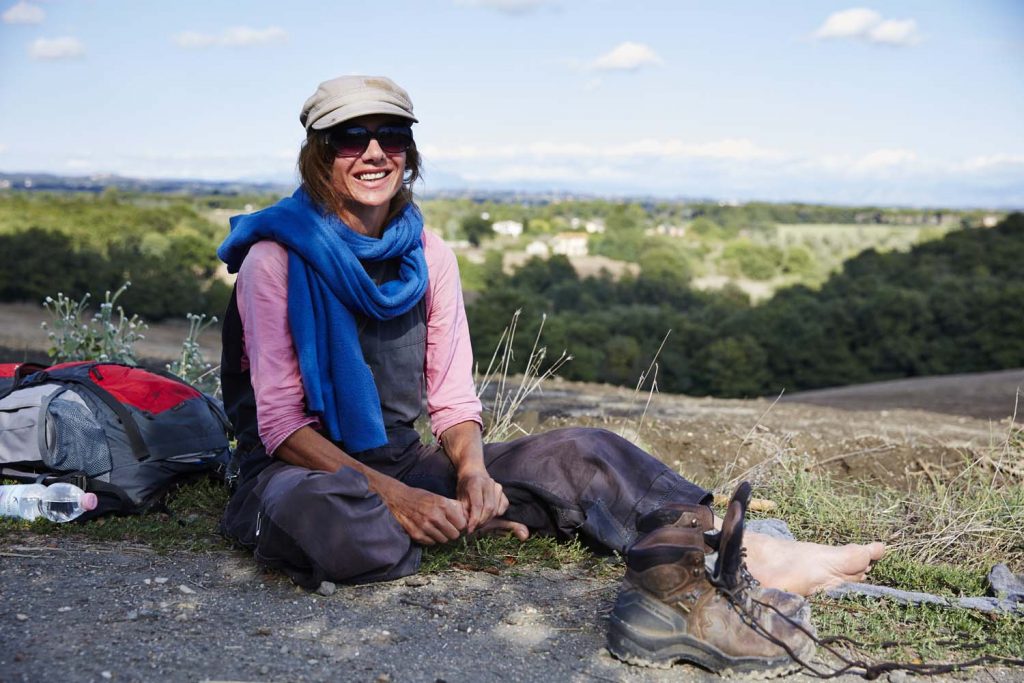 Taking a rest from walking the Via Francigena on the way to Isola Farnese.

Crossing from Switzerland into Italy via the Great St Bernard Pass stage 1 of the Via Francigena involves walking through superb alpine landscapes. The Great St Bernard Pass is said to have been named after either; Bernard De Menthon, a monk who set up a hospice high in the mountains, or the St Bernard dogs that were brought to the area to rescue travelers in distress. Whatever the story, at an altitude of 2,473m walking over the pass surrounded by the dramatic mountain peaks is an incredible experience. Descending into the Aosta Valley you have the chance to explore the many Roman remains that litter the area such as the Pretorian Arch and theatre in Aosta. The route proceeds to take you along ancient channels known as “rus” which over the centuries have been used to keep the crops on the dry, south-facing slopes irrigated. This initial section of the Via Francigena finishes with a couple of days walking along the 'Chemins de Vignobles' a vineyard trail that passes by ancient castles and neat vineyards and orchards. 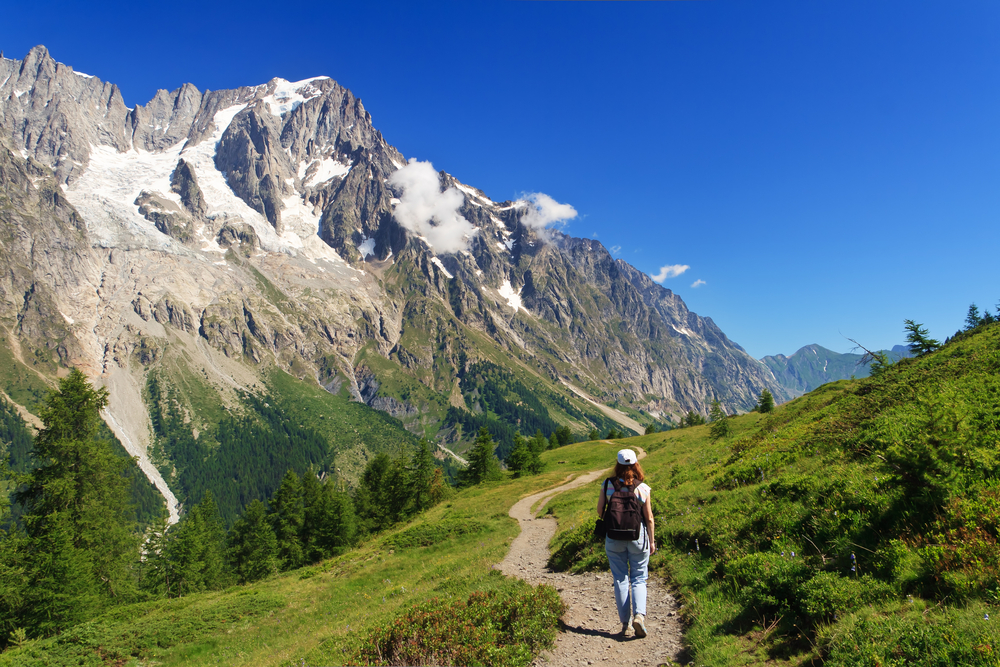 Stage 2 of the Via Francigena is full of contrasts, from the snow-capped Alps to the cultivated hills around Vercelli, and beyond to the vast wide plains of the Po River Valley. Walking through three different regions of Italy; Valle d'Aosta, Piedmont, and Lombardy, you visit medieval towns and their ancient towers and churches before skirting around a shimmering Lake Viverone. Whilst walking in the Lomellina area of Lombardy be sure to try Salame d'Orca. The raising of geese is a tradition here and was inspired by the numerous Jewish communities in the area, resulting in the specialty of goose salami. This section finishes in Garlasco, a small town surrounded by rice paddies and cornfields. 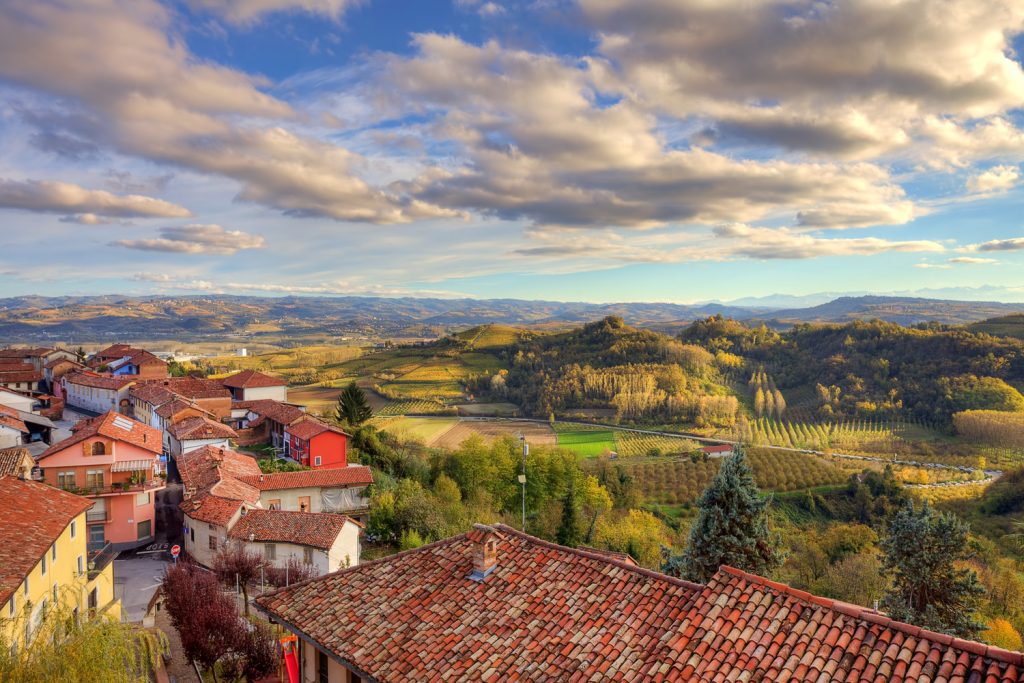 Looking out over the Piedmont region.

Stage 3 will take you through the regions of Lombardy and Emilia Romagna. The initial stages see you crossing the fertile plains of Lombardy before reaching the vineyard-covered hills of the Apennine Mountains in Emilia Romagna. Whilst in Lombardy you will walk alongside four rivers; the Sesia, the Ticino, the Trebbia and finally the Po River before reaching Ticino National Park which is home to a large diversity of flora and fauna. The highlight of this section for many is exploring the traditional towns of Pavia and Piacenza, both of which are home to a number of artistic and cultural gems, amassed over the centuries. The tour finishes in Fidenza, in the foothills of the Apennine Mountains in the glorious Emilia Romagna region, a contrast to the expanse of fertile plains at the beginning of the stage. 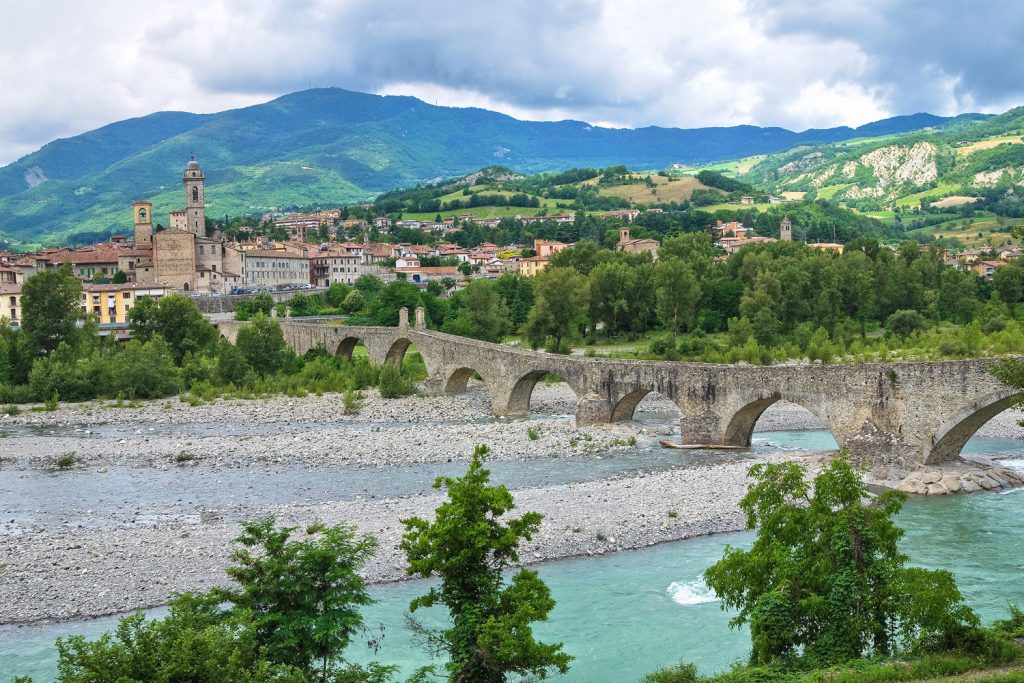 The impressive Ponte Gobbo (hunchback bridge) in the town of Bobbio, Emilia Romagna

Stage 4 sees you journey through the Apennine Mountains. Known as the “backbone of Italy” these mountains are home to unusual and rare rock formations such as the Salti del Diavolo in the Baganza Valley. Originating in Fidenza, known for its duomo of pink stone, cross the Cisa Pass and finish in Aulla, an important pilgrimage stop at the confluence of the Aulella and Magra River. En route you will see numerous signs of the vital importance of the Via Francigena to people of faith: Small altars, chapels, crosses, churches, and buildings that gave shelter to the thousands of pilgrims that have walked along the Via Francigena in their quest to reach Rome. At the beginning of your tour, you will explore areas near Parma, famous for its cured meats and parmesan cheeses - more culinary highlights to add to the list of foods to try whilst walking the Via Francigena. 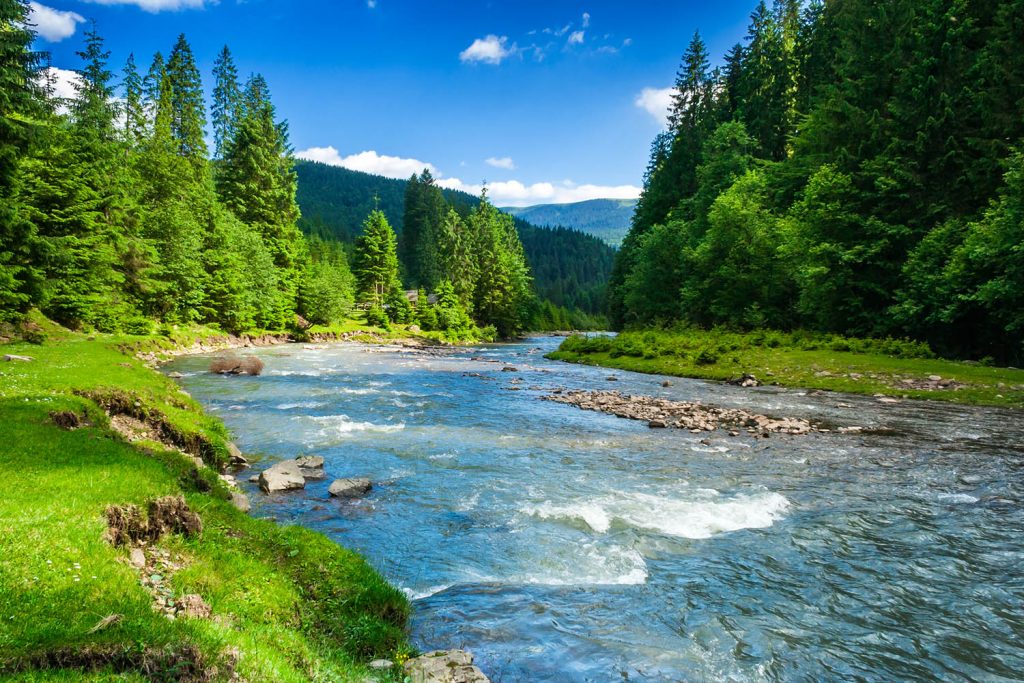 The trail follows rivers that pass through beautiful scenery.

Originating in the historical region of Lunigiana, an area of great gastronomy and lush, green meadows and waterfalls that belongs in part to Tuscany and in part to Liguriayour stage 5 of the Via Francigena takes you from Aulla at the foot of the Apennines, along the coast into northern Tuscany and the medieval village of San Miniato. From the glorious views over the Apuane Alps to the imposing and majestic structure of the Brunella Fortress, the majestic hills and valleys and ancient and strategic strongholds mean this section of the Via Francigena does not disappoint. Lucca is a beautiful city that was once a Roman town, today the Piazza San Michele occupies the old site of the Roman Forum however the renaissance-era walls that encircle the city center are well preserved and make for a popular evening stroll. Finish in the medieval village of San Miniato which sits atop three small hills in the very center of Tuscany, at the intersection of the Florence-Pisa and Lucca-Siena roads making San Miniato a strategically important settlement. 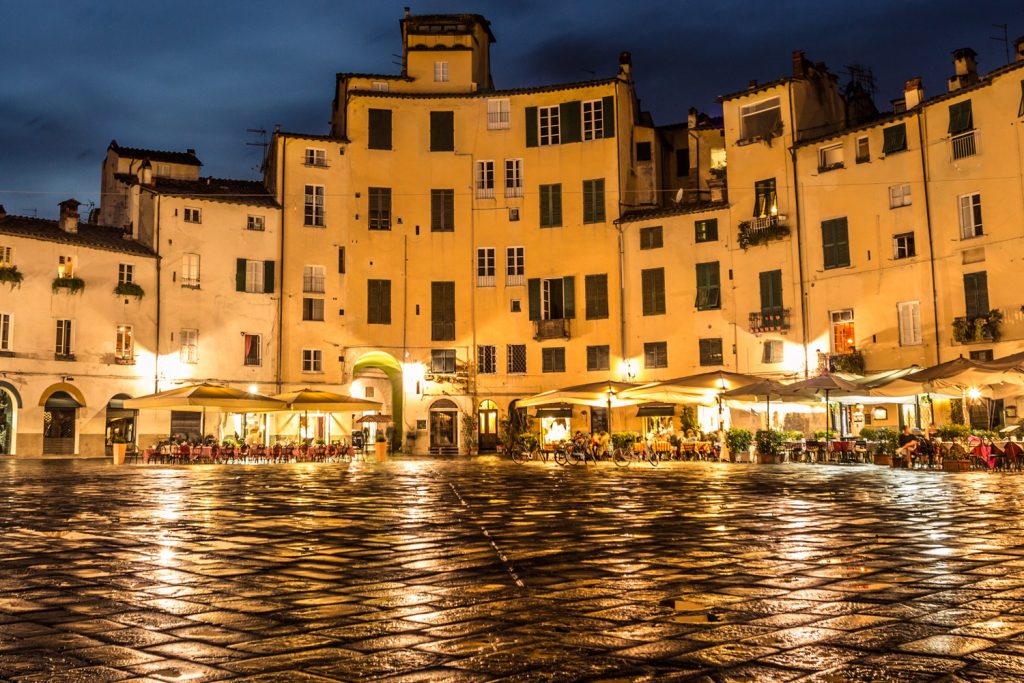 The Piazza Anfiteatro in Lucca.

This journey encompasses all the highlights of central Tuscany and offers fascinating insights into the culture, history, art, and architecture of the many towns and villages that you pass through. Stage 6 of the Via Francigena takes you from the charming village of San Miniato to San Quirico on the northern edge of the Valley d’Orcia. On the way to San Quirico, you will walk through the famous Chianti vineyards and the UNESCO World Heritage Site of San Gimignano also known as the 'Manhattan of Tuscany' because of the impressive towers that date back to the 12th century. Monteriggioni is your next destination which, like many of the Italian towns you walk through, is enclosed by still intact, medieval walls. With its medieval buildings and the shell-shaped Piazza del Campo, Siena is unquestionably one of the highlights of this stage. Walking through quintessential Tuscan landscapes, beside beautiful vineyards, and staying in the famed hilltop towns of Siena and San Gimignano makes this stage of the Via Francigena a firm favorite among many. 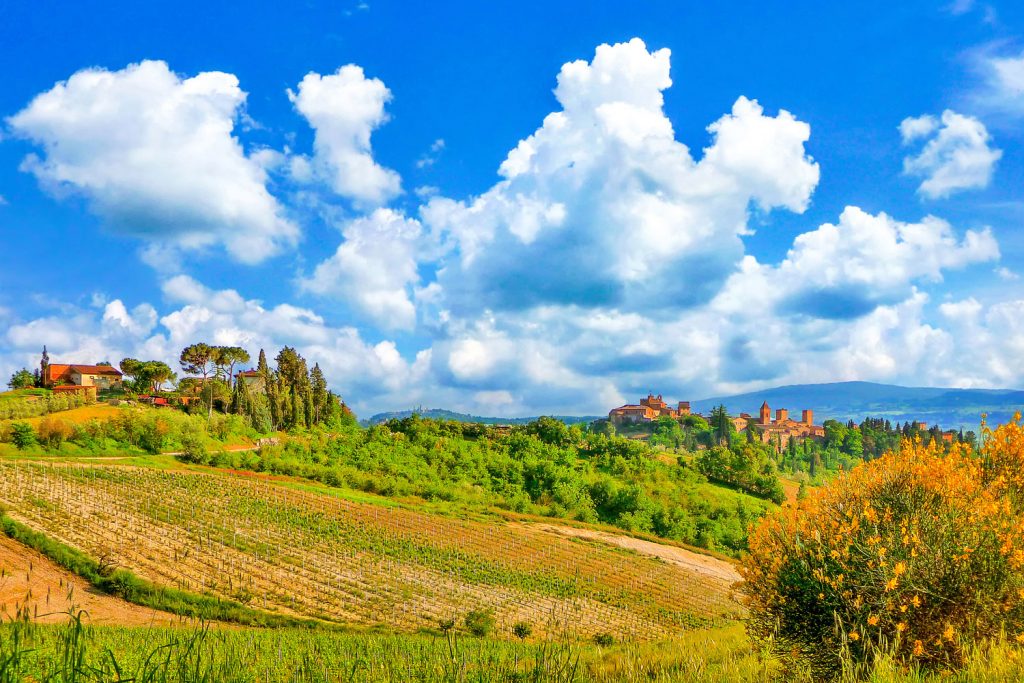 Following in the footsteps of pilgrims from the Middle Ages this section of the Via Francigena begins in the heart of the Tuscan countryside and finishes in the medieval town of Montefiascone. For the most part, this section of the Via Francigena takes you through the glorious landscapes of Tuscany, carpeted with cypress-studded hills and where the birth of the Renaissance began. One of the highlights of this stage is passing through the geologically unique and ochre-colored landscapes of the Crete Senesi, a UNESCO World Heritage Site. The town of Radicofani was an important stronghold in Italy for centuries and you can see its citadel from 10km away! Enjoy a night beside Lago di Bolsena with its crystal clear waters before finishing in the pretty hill-top town of Montefiascone. 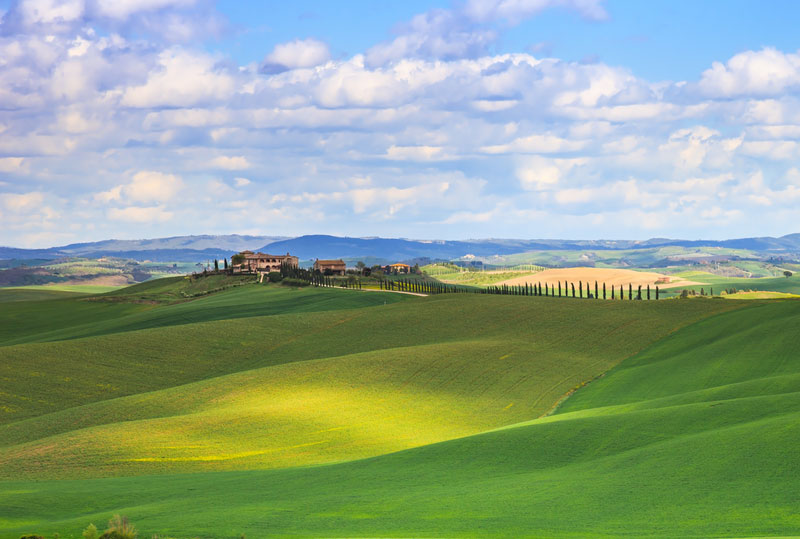 Cypress tree-lined roads are a common sight on any Italian tour.

The final stage of the Via Francigena takes you from the hilltop town of Montefiascone to the eternal city, Rome. Begin in Montefiascone, a town from which there are great views over Lago di Bolsena and continue on through rural and pristine areas of Italy that many tourists do not visit. As you walk you become immersed in the true culture of these historical areas passing many hill-top villages, Etruscan and Roman remains, papal palaces, and thermal pools. Highlights include the Bagnaccio thermal pools where you can enjoy a soak in the milky green and steaming waters and Viterbo which, despite suffering heavy bombing in WWII is the best-preserved medieval town in the Lazio region. Wander through Sutri's enchanting old quarter discovering the Roman amphitheater and the place of worship, the Mithraeum. Pass rivers, streams, and waterfalls and marvel at the stunning and serene green valley of Sorbo where you will see grazing wild horses. As you descend into Rome through the parks of Insugherata and Mt Mario reflect on what has been an epic journey through rural Italy. 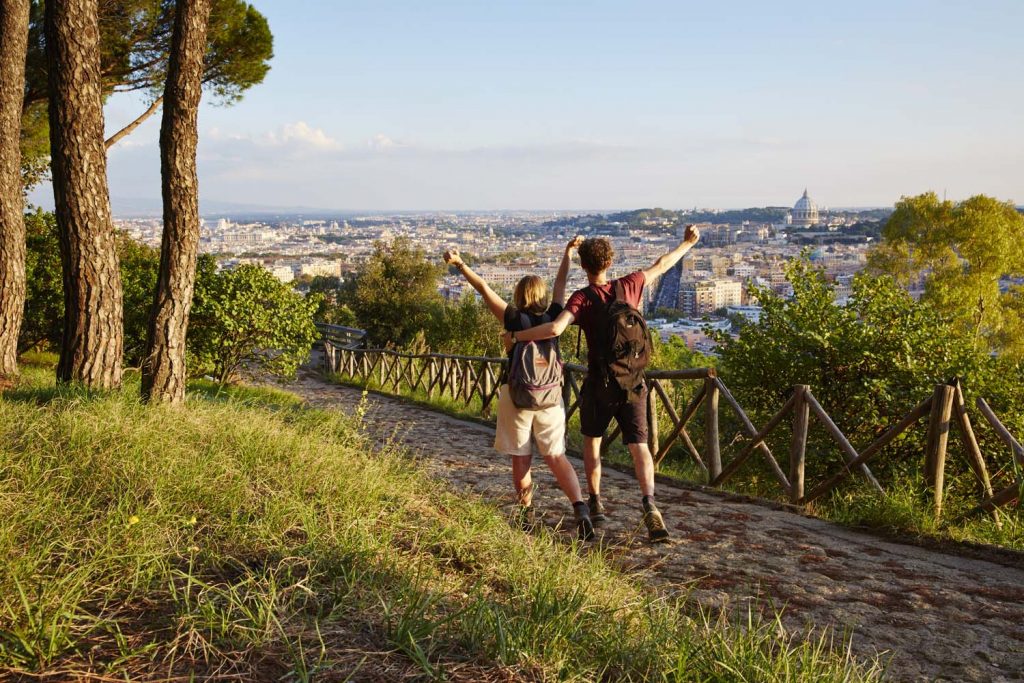 View of Rome from Riserva Naturale di Monte Mario, with St Peters in the background.

If you have any questions about the Via Francigena or Macs Adventure's range of walking and cycling tours in Italy get in touch with the team on hello@macsadventure.com or give us a call on 0141 530 8886. For more from Macs Adventure including travel tips and advice, sign up for our adventure travel newsletter!