Scotland boasts four distinctive seasons and a walking holiday in each of these seasons promises many new and rewarding treats. Landscapes, as well as a wealth of flora and fauna, change from season to season and walkers will be delighted by all that they see in spring, summer, autumn and winter. Here we bring you a guide to walking in each of the Scottish seasons, and some top tips of the best times to see Scottish wildlife.

Walking in Scotland in Spring

For walkers who prefer milder temperatures yet good chances of sunny days, spring is a great time to head to Scotland. In recent years, springtime has boasted some of the UK’s best weather and Scotland in spring is hard to beat. However, you should come prepared for some days of rain. The rain is seen as a good thing for spring blooming flowers and plants, it’s just a case of dressing according to the weather. The UK is also famed for its April showers so waterproof jackets, trousers and boots are essential kit for walking holidays in spring. Spring scenery boasts lots of shades of green and is dotted with amazing colours. It’s at this time of year that the trees and flowers burst into bloom after winter, with such treats as bright yellow daffodils and dazzling displays of bluebells. You might even see the first pretty buds of May Blossom on cherry trees. Wildlife is quick to take advantage of warmer days. Highlights might include seeing ospreys returning from southern climes to reclaim their nest sites on pines and pylons in the Highlands and Scottish Borders. You can sometimes hear the sounds of the elusive capercaillie as they proudly proclaim their status to females in Scotland's ancient Caledonian forests. Salmon make their way upstream to spawn I spring, especially in the rivers Tweed, Tay and Spey. Seabirds come to Scotland in spring to breed. Gannets, fulmars and shags, for example, head to places such as Noss in Shetland, St Kilda and the Bass Rock, East Lothian. Another popular breeding ground is the machair of the Outer Hebrides. This low, fertile land attracts many thousands of breeding wading birds, especially lapwing.

Walking in Scotland in Summer 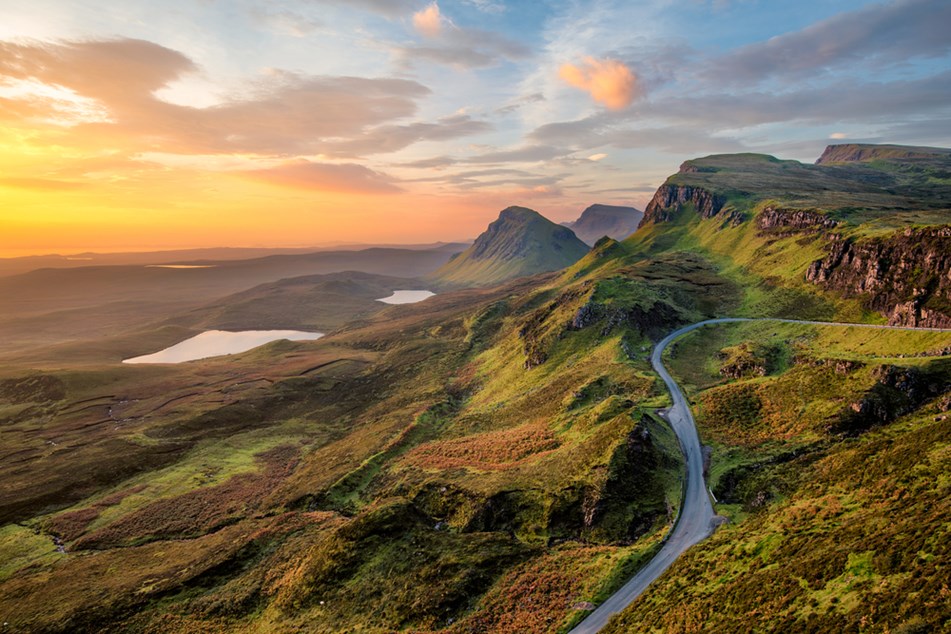 Believe it or not, this photo was taken around 10 pm. Long summer nights!

Summer usually boasts higher temperatures but for people who are used to the searing heat of southern Europe, there are very few days in the calendar year when the heat is deemed oppressive in Scotland. This is a wonderful time for a walking holiday in Scotland. Summer can still bring some days of rain so you should be prepared for wet weather, as well as warm weather. Pack waterproof clothing for days when it rains and shorts and t-shirts (as well as sunscreen) for days when the sun shines. One of the things that people love about Scotland is the ever-changing weather forecast. Summer in Scotland is a time of bright colours, fabulous light and a landscape that truly comes to life. Scotland’s many trees and plants offer their full growth of foliage and flowers. Wildflowers dot the landscape and walkers are often amazed by how many different natural species they can spot. In July, many seabird colonies are still making themselves seen and heard. Puffins, for example, can be spotted zipping to and from their burrows with mouthfuls of sand eels. This is the best time to spot cetaceans of all shapes and sizes. The Moray Firth's bottlenose dolphins offer fine displays, while their white-beaked and white-sided cousins often surface around the Hebridean islands.  The west coast is also a fantastic place to spot whales. In Speyside and Perthshire, summer is the season for red squirrel litters and osprey chicks. In the Highland glens, red deer will be calving and, in late summer, stags shed their velvet as their new antlers finish growing. Oh, and you may well have heard about the midge. These wee beasties are a favourite topic of conversation in summertime Scotland. However, it’s worth remembering that they don’t bother you if it is raining, breezy, bright and sunny or if you are moving faster than 2mph (which most people do when they are walking!). And since you will be staying in B&Bs and hotels on our walking holidays you will not have to worry about midges in the early evening (which is their favourite time to come out for a spot of socialising).

Walking in Scotland in Autumn 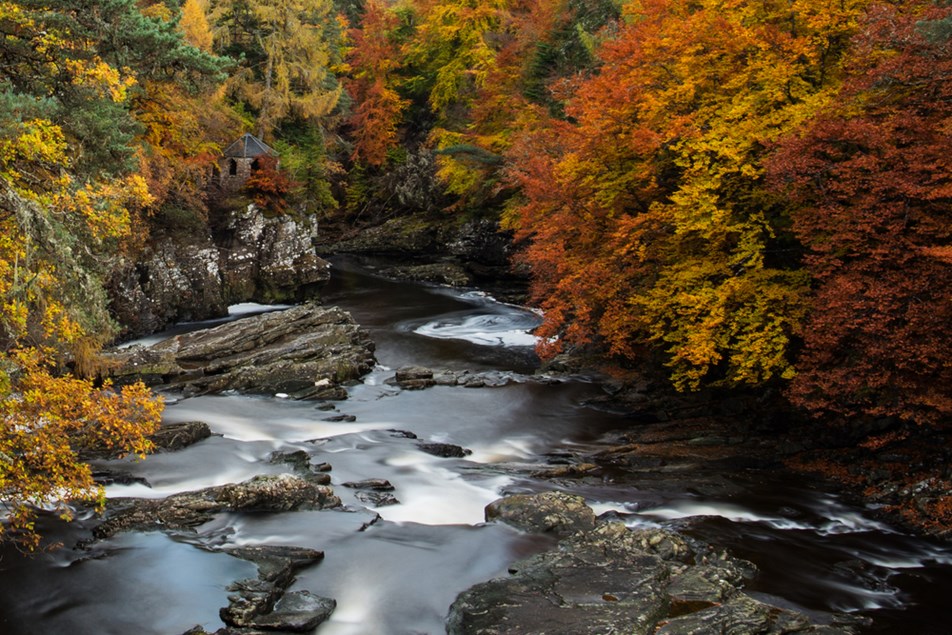 In Autumn, cooler temperatures bring the promise of frequent blue-sky days, crisp conditions underfoot and spectacular reds, oranges and yellows of foliage as it changes from summer green to its autumn palette. The stunning colours only add to the beauty of the Scottish glens and with snow dusting the highest tops the landscape is a delight for walkers. Autumn is when the purple glow of mountain heather can be best seen. Indeed, the landscapes of autumn are often some of the most colourful and picturesque seen in the entire year. It is important o be prepared for colder days and some rain, although autumn is traditionally a drier season. Bring waterproof clothing and lots of layers for extra warmth, especially if you are not used to temperatures that sometimes hover just above freezing. While temperatures drop in autumn, this is still a time for lots of wildlife action. Highland stags take part in their annual rut in autumn, with their often violent ritual defined by echoing roars and the clatter of antlers. The Solway coast of Dumfries & Galloway comes alive as the entire breeding population of some 25,000 barnacle geese from Spitsbergen descends on salt marshes and mudflats. Hundreds of Icelandic whooper swans and Siberian swans also appear. Other highlights include grey seals and their fur-coated pups at locations such as Oronsay and the Monach Isles, as well as the East Lothian coastline.

Walking in Scotland in winter 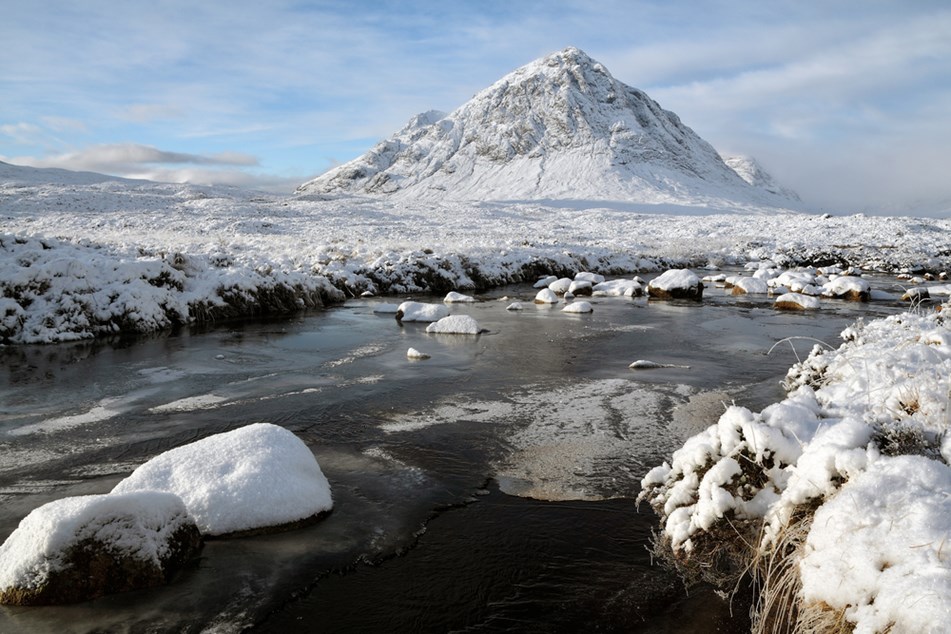 The classic Scottish photo of the Buchaille, dressed in white.

Scotland in winter is another dramatically stunning season. Less experienced walkers can still enjoy lower-level trails and waymarked routes across the country but with fabulous views of snowy mountains and icy waterways. Walkers should be prepared for a range of weather, from rain and snow to crisp and frosty days with fantastic high blue skies. Winter can be harsh for wildlife in Scotland and at higher levels, only the hardiest of species, such as the ptarmigan, survive. At lower levels, you will often see geese, swans and a huge variety of ducks going about their daily business. Winter is the time for courting ducks, and you might be lucky enough to catch this spectacle in January and February. In the Highlands, wildcats and red squirrels court more furtively in the glens and forests. Come February and you’ll see mountain hares start to lose their winter camouflage and grow new, lighter coats. This heralds the start of the spring season – and a time when walkers get back to the higher mountain trails again.

Share this:
Tags
Scotland West Highland Way Walking
Call us on +44 141 530 5452
Get in touch by Email
Contact a specialist Live Chat