Cornwall, a Land of Sea and Sky 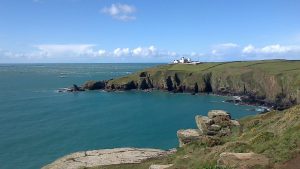 A glance at the statistics of the County of Cornwall indicates nothing remarkable about this region; numbered 12th out of forty-eight counties by land area, numbered 40th by population, its highest peak a modest 420 metres above sea level. However a closer look at Cornwall’s geography and history reveals something very definitely out of the ordinary. Thrust like a pointed finger into the Atlantic Ocean, the South West Peninsula is technically bordered to the North by the Celtic Sea and to the South by the English Channel. The River Tamar forms Cornwall’s one land boundary and almost endows the County with the status of an island for, although it meets the sea at Plymouth Sound on the South coast, its source is less than five miles from the northern coastline.

From Bodmin Moor to Land’s End, a line of huge granite outcrops forms Cornwall’s backbone and reaches forty-five miles under the sea to the Scilly Islands and beyond. Unlike most of Europe, the Romans never really ruled here. Cornwall’s original language is internationally recognised as Celtic, closely related to Welsh and Breton. The highest point in Cornwall, “Kernow” in Cornish, is not really a lump of rock called Brown Willy but “Bronn Wennili” meaning “Hill of Swallows”. Those born Cornish are passionate about their land and origins, although the visitor will only encounter locals of a friendly, generally British outlook. Victorian gardeners brought their exotic plant collections to Cornwall’s benign climate. Literary, artistic and scientific minds have come to Cornwall for its isolation, its light and its inspiration. But North and South Coasts are quite different and the question arises – which one should I visit? Oh, that’s simple… you visit both. 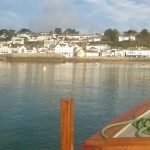 Approaching St Mawes on the ferry from Place 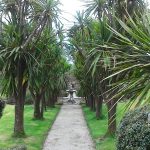 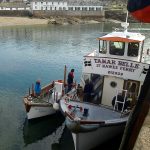 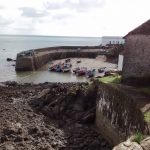