First cycling holiday: At the age of 60 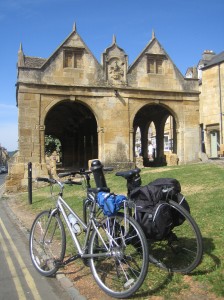 As a kid I was always out on my bike (very different world back in the 1960s). Then, many years later, when the central line suffered a long time closure, I took back to cycling to commute to work. However, I never got into cycling as a leisure activity. I never invest in a good bike (it would only get stolen in London) and all the gear to become a middle-aged man in lycra (MAMIL). Perhaps the official starting point of old age, more than anything else, inspired me to persuade my long-suffering wife to join me on a cycling holiday. With retirement, I no longer needed to use the bike to commute anymore. Furthermore, getting my doddery old git (DOG) free travel pass gave me even less incentive to get onto the saddle. 'We need to get active again' I pleaded. After all, as I told the wife, 'that is what retirement is for - doing the things you never had time for when working before you get too old to do them'. So me and the wife left the busy streets of London (with its depressing ghost bikes at ever junction) for a far safer more rustic quieter part of the world to undertake our cycling adventure in the Cotswolds, the heart of England, home of the Archers. 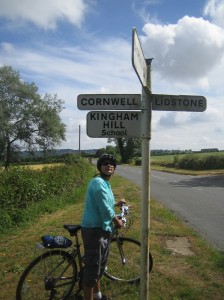 Once booked into our hotel in Moreton-in-Marsh, we met Tom, the bike hire man, who arrived dead on time as arranged at the hotel. Tom fixed us up with two wonderful brand new super light hybrid bikes that changed gear perfectly (unlike the one I had at home). He helped us get the saddle heights right and ran over the details of how to change the inner tube, should we get a puncture. I had never been particularly handy at dealing with punctures (though usually just about managed it), as Tom could see from my facial expression. 'If you get stuck with anything just call me and I'll come out and help you' he told us. That was very reassuring to hear - though fortunately, we didn't need to take him up on his kind offer.

So off we went on a couple of loops around Moreton-in-Marsh, along little lanes with virtually no traffic (other than postmen in vans delivering Amazon parcels to yellow stone cottages). Then on to Broadway where we did another couple of loops. We had not brought any special cycling clothing or equipment, other than helmets and water flasks, and as it was mid-summer we seemed to be ok without all the prescribed bits and pieces that Macs Adventure recommended.

However, we were glad of the water flasks as the uphill stretches of our routes proved to bring on a thirst. Furthermore, after the first day we regretted not having invested in cycling glasses (the glare of the sun and constant facial collision with insects made our eyes very sore). However, we managed to get a couple of pairs of cheap wrap-around sunglasses from the chemist which served the purpose. The distances of the routes Macs Adventures had given us were around 30 miles per day. Though they involved a little over half a day on the bike, we were happy with this. The longer day's trip to Stratford on Avon was an all-day journey.  Though it was very enjoyable (not least for a long section along a dismantled railway, 'The Greenway', on the way out of Stratford) it did leave us a bit tired by the end of the day. So should old retired people be doing cycling holidays? We think so. At the end of the holiday we felt a bit leaner and fitter, talking about where else we might cycle - perhaps somewhere a little less hilly.