Peace of Mind Booking Guarantee
67
Guest Blog - Walking the West Highland Way by Dr Keith Thomson
Do you have any questions?
Call us on +44 141 530 5452
Contact a specialistLive Chat
Written by

What a wonderful walk five friends (Martyn, John, Tony, Nick, Geof) and I had during the Royal Wedding weekend, completing the 96 mile West Highland Way (WHW) from Milngavie, a northern suburb of Glasgow, to Fort William in only four days.  We enjoyed cloudless skies and sunshine every day but, most importantly, there were no midges!  All accommodation and the transport of our bags from one hotel to the next was organised by Ewan of Macs Adventure based in Glasgow – he did an excellent job. The reason for this crazy venture was training for the Caledonian Challenge (CC) which, as a team called The Over Sixtys, we planned to attempt six weeks later.  The aim of this annual charity fund raise, for the Scottish Community Foundation, is to complete 54 miles of the WHW from North to South in less than 24 hours.  An achievement which we thought might be possible in spite of the dubious distinction of being the oldest team entered in the 2011 event.

At the start of the West Highland Way[/caption] After uneventful flights from London to Glasgow and a comfortable night in a Premier Inn, within walking distance of the start of the WHW (fig 2), we set off at 09.30 for our first night’s stop – Balmaha on the Southern end of Loch Lomond.  The weather was perfect, not a cloud in the sky and with a gentle cooling breeze.  I carried a small radio to listen to the Royal Wedding live on Classic FM. We were able to average over three miles per hour until the one and only real ascent of the day up the side of Conic Hill (361m). When we reached the highest point of the path some of us did a detour to the summit for a spectacular, if somewhat blustery, view of Loch Lomond.  The descent to the loch side was quite challenging due to the uneven ground, but we arrived safely at the Oak Tree Inn in Balmaha, our destination for the first night. [caption id="attachment_4520" align="alignleft" width="210"]

Cottages at the Oak Tree Inn[/caption] We were accommodated in well equipped cottages about 5 min walk from the hotel, but no staff were available to help carry our cases, a problem for me as my rather heavy Life Adventure bag had no wheels.  The gastro pub at the hotel was justifiably very popular but a very helpful young South African manager found us a table.  We had a good meal, the Cullen Skink was particularly memorable.

Beautiful view out over Loch Lomond[/caption] I had been warned this was going to be one of the toughest days of the whole WHW because of the terrain over the final six miles along the east bank of Loch Lomond from Inversnaid to Inverarnan. This did indeed prove to be a bit of a scramble across large roots and up and down significant rocks.  The problems we encountered were really nothing compared with those of the participants who ran that day fifty mile plus from Milngavie to Tyndrum in an annual event known as the Highland Fling.  We were passed by some impres-sive athletes, only three and a half hours from the start after they had already covered 21 miles including the arduous ascent and descent of Conic Hill!  It was another beautiful day during which we enjoyed the scenery along the whole eastern side of the Loch. [caption id="attachment_4530" align="alignleft" width="214"]

The Drovers Inn, Inverarnan[/caption] We stayed that night in the Drover’s Inn, (fig 12) a place one could say had a great deal of character. It is described in Charlie Loram’s guide to the West Highland Way as ‘an eccentric mix of smoke blackened walls, sagging, velvet covered chairs and moulting stuffed animals with bar staff wearing kilts and T-shirts'.   The bar was absolutely packed and service was provided by some amusing staff, mainly Antipodean. 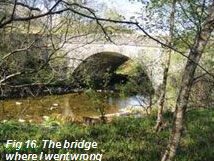 The bridge where it all went wrong[/caption] This was our longest day and took us via Crianlarich, Tyndrum and Bridge of Orchy to the Kings House Hotel in Glencoe.  Due to the distance we decided to miss breakfast and depart at 6.00 am.  The day was going well for me until about two miles South of Tyndrum.  Just after passing the remains of 13th century St Fillans Priory I missed a Way marker and proceeded at least two miles up a track towards Ben Lui. Eventually when my progress was blocked by a 12 foot high deer fence with a padlocked gate, I began to suspect that I was no longer on the correct path!  Luckily, ahead were three men who had just climbed over the gate and were near enough for me to enquire whether I was still on the WHW. One of them replied “No laddie, it is several miles back doon the valley.” Forced to retrace my steps I eventually arrived in Tyndrum over an hour later to find no sign of any of my friends.  Nick, I discovered later, was still there having decided to take the bus to Kingshouse, but I did not spot him among a gathering of several hundred leather clad bikers!  So after a quick lunch at the Green Welly stop, I called my wife from a phone box (no mobile signal) to ask her to contact the others and tell them I would be at Bridge of Orchy, seven miles from Tyndrum, within the next two hours. [caption id="attachment_4534" align="alignleft" width="211"]

The desolate, but beautiful Rannoch Moor[/caption] Tyndrum to Bridge of Orchy John chivvied me across the bleak landscape of Rannoch Moor, said to be the remotest and most desolate part of the WHW.  We stopped for a ten minute break I arrived at the Bridge of Orchy Hotel to be greeted by Martyn and John.  After some fluid resuscitation and a change of socks we set off for the Kings House Hotel, a distance of only thirteen miles which started with three miles of pleasant walking over a small ridge to the Inveroran Hotel and then round the head of Loch Tulla.  We eventually arrived at our destination in Glen Coe, just in time for supper, 13 hours after we had set out from the Drovers. The others had covered 32 miles but with my earlier detour, I had walked at least 36.  The positive attitude, I realised was that I had done more training towards the ‘big one’ in June. 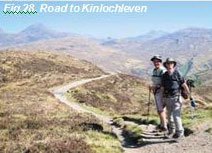 At the top of the Devils Staircase, looking down to Kinlochleven[/caption] After an excellent breakfast of porridge and a full Scottish, we set off on a beautiful clear morning with the spectacular Buachaille Etive Mor dominating the south side of the Glen.  Two miles down the valley we arrived at the bottom of the ‘Devil’s Staircase,’ an 850 ft ascent, which all of us managed to walk up without even pausing for breath, just an occasional photo opportunity!  From the summit ridge it was a 4 1/2 mile downhill slog to Kinlochleven, which has been described as an ugly modern village set amidst dramatic highland scenery.  The aluminium smelter is now closed but the water pipes still remain.  I noted that the reverse route would probably be the toughest section during the CC in June.  After refuelling in a local pub we set off for the final leg of our journey. The initial long 820 ft climb out of Kinlochleven on a steep winding trail through birch trees took me by surprise and seemed tougher than the Devil’s Staircase. [caption id="attachment_4542" align="alignleft" width="214"] 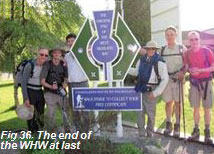 At the End of the West Highland Way[/caption] The next few miles were on an exposed and remote trail to Lairigmor.  After this, the way descended and climbed through both denuded areas and dense conifer plantations, with occasional views of Ben Nevis.  After reaching Glen Nevis, a few miles before our destination, I received a call from Martyn and Geof, I assumed to inform us ‘stragglers’ that they were already in a Fort William pub, but they had taken a slight inadvertent detour and were in fact behind us!  All six of us eventfully arrived in Fort William at 6pm with enough time for a welcome shower at the station facility, followed by a much needed pint with a plate of fish and chips at a nearby pub before boarding our overnight sleeper to London Euston which departed on schedule at 7.50 pm.

As a group we were well acquainted, five hospital doctors and one businessman (Hon doc Martyn!), having walked together in Scotland during the early May bank holiday on and off for the past 20 years.  That fact, combined with conquering the WHW in only four days (most guidebooks quote 6-9 days), would hopefully contribute towards success in the forthcoming Caledonian Challenge. Our thanks to Keith for writing this fantastic review of the trip and if you want to walk the West Highland Way or any other Walking Holiday in Scotland, then please don't hesitate to get in touch with us at info@macsadventure.com