Peace of Mind Booking Guarantee
67
New Coast 2 Coast cycle route for Scotland
Do you have any questions?
Call us on +44 141 530 5452
Contact a specialistLive Chat
Written by

Long-distance bike routes are popular with cycle tourers. In England, one of the most popular is the Sea to Sea (C2C) route across the Pennines from the Irish Sea to the North Sea. Now there’s a new coast-to-coast route in Scotland called the C2C Scotland. Launched only last year, there is now an accompanying guide and map that details the waymarked tour from Annan, on the Solway Firth, in Dumfries & Galloway and heads north to the Firth of Forth, near Edinburgh. The 125-mile (or so) route travels through three valleys, the Annan, Tweed and Esk, and via the rolling Southern Uplands and Moorfoot Hills. This ride links the Solway Firth to the Firth of Forth by way of three river valleys, the Annan, the Tweed, and the Esk, and the Southern Upland and Moorfoot Hills in between. The route has come about as a consequence of an initiative by the Upper Tweed Railway Path Group to negotiate to open an extensive length of former railway west of Peebles, in the Borders. This coincided with the Scottish Borders Council opening the 11km Railway Greenway route from Peebles to Innerleithen in 2013 and Edinburgh City Council's resolve to open a continuous coastal promenade route from Joppa to Granton.

Richard Peace is author of the Ultimate Scottish C2C Guide. He says: “The route is the brainchild of the same people, Sustrans founder John Grimshaw CBE and David Gray, who 20 years ago created the C2C route across northern England. “I really hope it will become just as popular and that it will put this scenic part of Scotland on the map for more cyclists.” The Scottish C2C can be travelled on road or on a mix of road and trails. Richard adds: “This is a beautiful route on mainly quiet roads and some traffic-free sections, as well as some trail routes if you are on a hybrid or mountain bike. “It can be ridden over two or more days with lots of places to stay and visit en route so it makes a great multi-day cycle tour.”

More about the Scottish C2C

The ride starts on the Solway coast at Annan, either at the old harbour or at the site of the once impressive railway viaduct from Bowness. The route is then divided into four main sections traveling 32.5 miles to the market town of Moffat. (There is a tougher alternative option with off-road sections via Dumfries and the Forest of Ae from Annan to Moffat.) From Moffat to the attractive tourist town of Peebles is another 37 miles before a 31.5 mile stretch to Dalkieth in Mildlothian. 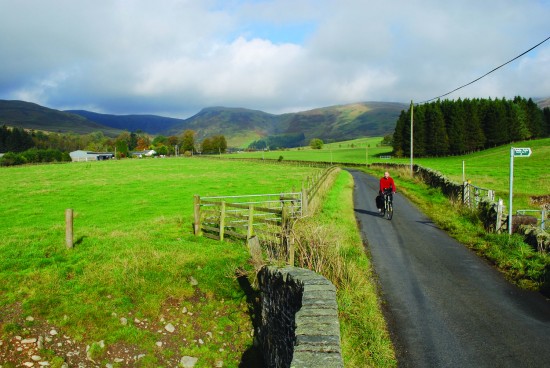 The Forth Bridge is a further 24 miles where the route finishes beneath the iconic landmark. Highlights for cyclists include the dramatic landscape as you climb alongside the Devil's Beef Tub and the descent to Broughton. Buy the Ultimate Scottish C2C Guide for £11.50.