The Camino de Santiago - What's in a name? 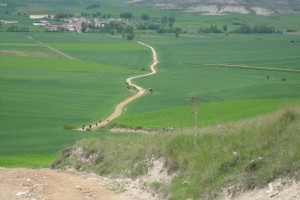 The path stretching out before you.

Over the 1000 years of its existence, The Camino de Santiago has accrued a number of names.  These have derived from different sources and been altered over the years, but when coming to book your trip to Santiago, it can get a little confusing as to which route you are travelling, being that they all have such different names. There are several different Camino de Santiagos.  All have a different starting point, but the end is always Santiago de Compostela in Galicia, Spain.  However 9 times out of 10, people are looking to walk the most popular route, from St Jean Pied de Port in France, which is the most confusingly titled of them all. 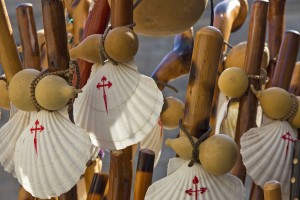 Scallop shells with the cross of St James or St Jaques......

Firstly, it is called the French Way or the Camino Francés, which does seem odd as only the first 20km are in France, the subsequent 750km being in Spain, but oh no, it can't be the Spanish way as there are at least 8 other Caminos in Spain already.  Also, there is a Camino in France, which goes to St Jean Pied de Port, but it is NOT the Camino Francés either, it has about 5 names of its own! Then there are the variations on St James.  It is St James tomb that lies in Santiago (though this fact is disputed by many) which has formed the basis of these pilgrimages.   So, the Camino Francés is also called, The Way of St James, St James' Way, St James' Path, St James' Trail and just to confuse things it is called Le Chemin St. Jaques, because Jaques is an old French term for James.  So from this you also get the Route of St Jaques etc etc.  Confused yet? 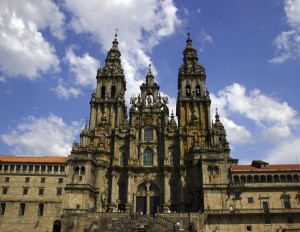 The resting place of St James

More recently, Emilio Estavez has simplified matters by making the film The Way.  We know what everyone means when they say The Way and while it may not satisfy everyone and some people prefer not to match this spiritual adventure up with a film, it does make naming things a lot simpler. For more information on the Camino Francés or any of the other names it is called, dont hesitate to visit our website or you can get in touch with one of our specialists at info@macsadventure.com