Peace of Mind Booking Guarantee
67
The joys of a long-distance cycle route
Do you have any questions?
Call us on +44 141 530 5452
Contact a specialistLive Chat
Written by

The joys of a long-distance cycle route

This week I joined a trio of ladies from England who were five days into a long-distance bike ride from John o’ Groats to Land’s End. This route is affectionately known as the JoGLE and can also be cycled in reverse as the LEJoG (Lend's End to John o' Groats). But why would you want to ride a route that amounts to around 1,000 miles and presents numerous challenges, including hills, fickle weather and wind and some tricky navigation? Wouldn’t most people prefer to fly overseas for a beach holiday during their precious time off from work? Not so, according to some records kept at hotels at the start/finish of this famous UK cycle route (and anecdotally), for it appears that there is a big increase in the number of people taking on the LeJOG/JoGLE. This, of course, tallies with the general rise in cycling in the UK.

Trio of ladies on the JoGLE

I accompanied my friends from Inveraray to Glasgow, via the Rest and Be Thankful, Arrochar, Helensburgh, Dumbarton, Bearsden and the Kelvin River path. This might not be the same route that everyone follows but they were keen for an overnight with a friend and my home, at Bearsden, is sort of en route to Lockerbie (their next stop). I was able to offer a high carbs meal, decent beds, a washing machine and sports massage (my partner is a qualified masseur). They were very grateful. The ladies, Charlotte, Teeney and Emily, were carrying panniers and sensibly riding at an easy-ish pace. Their plan is longer in the saddle but fewer aches in their muscles, so they have been keeping the pace to an average of around 11mph. The daily distances have been about 75 miles. They are travelling north to south because they have friends and family waiting in Cornwall for them for a celebratory finishing party. I thoroughly enjoyed guiding the women through a part of Scotland that I know well and being able to do this on a sunny day made the 70 mile trip even better. 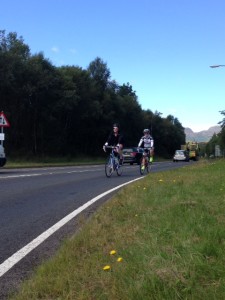 Cycling from Arrochar to Helensburgh in Scotland.

Attractions of the JoGLE

The long-distance bike ride coincides with Emily’s 40th birthday. She is a keen mountain biker who has taken up road cycling in the last two years. After enjoying a couple of cycling sportives, Emily reckoned that a long-distance bike ride would be just the thing to do on a fortnight’s holiday. She said: “I wanted a challenge and something that would feel remarkable as I approached my 40th. “I also thought it would be a good way to enjoy some time off with my friends. “The route we have come up with, after checking out other people’s suggestions, takes us to places we have never been before and through some amazing scenery. “So far the ride through Scotland has been incredible. It has made us want to return again to see more of this country.”

Charlotte has also enjoyed “getting away from everything”. She said: “When you are cycling all day, every day and then eating and sleeping afterwards you do not have time to think about much else. “We have been able to enjoy each other’s company away from all the normal hustle and bustle of busy lives and it does feel as though we are in our own world.” Charlotte says that she also likes the goal of an “A to B” each day. She said: “It feels like we have a point to each day, to reach our accommodation for the night. There is a daily challenge, as well as the overall challenge of the trip. Finishing the JoGLE will be something I will feel proud of.” Teeney has loved the change of pace. She said: “I would mostly run to keep fit or go to the gym so it’s lovely to cycle everywhere and enjoy the countryside at this perfect pace. “You get to see so much and at a pace that doesn’t feel too fast or too slow. I really recommend a multi-day cycling holiday.”

If you like the idea of a long-distance cycling tour why not consider these?

Sea to Sea cycle route: Pedal across northern England from the Irish Sea to the North Sea on quiet country lanes and cycle paths. You’ll enjoy the mountains of the Lake District National Park and the moors of the North Pennines. See Sea to Sea cycle tour.

Hadrian’s Cycleway: Discover Britain’s Roman frontier and take in the fabulous coastal views of this northern England bike ride. The trip starts in Bowness-on-Solway and heads through the heart of Hadrian’s Wall Country to reach Tynemouth on the east coast. See Hadrian’s cycle.