Peace of Mind Booking Guarantee
67
Tips from our resident wildlife expert: Dan Greenwood
Do you have any questions?
Call us on +44 141 530 5452
Contact a specialistLive Chat
Written by

The UK is a hotspot for seeing an unbelievable selection of wildlife, sea-life, and bird-life within small locales, and throughout Europe, there is an abundance of wild intrigue and colourful creatures to discover.

Our destination specialist (and resident wildlife expert) Dan Greenwood shares some of his top tours for wildlife spotting...

Perfect for a mix of both sea life and bird life! The cliffs of Sumburgh head at the far south of mainland Shetland are a magnet for sea birds. In the breeding season this becomes a "sea bird city", with an enormous congregation of guillemots, razorbills and puffins jostling for space above the turbulent northern Atlantic. 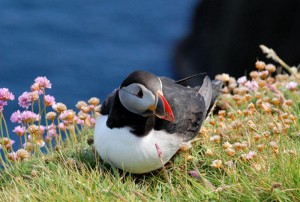 Sea bird cliffs are abound in the Northern Isles, and while watching from safe vantage points there is a good chance of spotting passing cetaceans such as bottle nose dolphins, minke whales and that most sought after species, the Orca! Inland there is much scope for bird watching with hen harriers quartering the fields and short eared owls scanning for prey through piercing yellow eyes! See more...

2. Visit the Monarchs of the Glen

The forests themselves are now home to a myriad of rare and endemic species of wildlife, from the elusive wildcat to the dapper diminutive crested tit. Regal capercaillie strut amongst the forest floor uttering their guttural mating calls, while the monarchs of the glen, the red deer stags, patrol the moorland. Smaller roe deer silently graze amongst the woods, and high in the pine tops the metallic 'chip' of Scotland's only endemic bird, the Scottish crossbill, rings out in the crisp wilderness.

Rare pine marten and russet red squirrels seek out food amongst the branches to thrill the patient observer. With the rounded knuckles of the Cairngorm peaks forming a dramatic backdrop what more would you want from a Scottish adventure!

Find out more about walking in the Cairngorms. 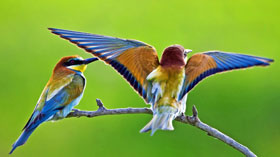 The wildlife viewing potential in the southern regions of Portugal is first rate. Many of the species are very rare out with the area and there is much scope to see an enormous variety in a short amount of time. The area around Faro itself abounds with birdlife and of you are flying in you will note egrets and occasionally flamingos on the salt flats below. The nearby lagoons are a haven for feeding shorebirds, including stilts, avocets and whimbrel.  Over flying marsh harriers and fishing ospreys often add a bit of action to the proceedings by sending all the wading birds skywards in a frenzy of avian mobbing behaviour!

All along the south coast, olive groves are a magnet for migrant birds on their northward spring passage and the same is true in the autumn on their return voyage south. Dapper woodchat shrikes pose with chestnut crowns atop thorny bushes ready to impale their unfortunate prey. Each and every bush becomes alive with the ‘chack chack’ of warblers, the sky filled with wheeling swallows and swifts.  One very rare and local resident of the dappled green foliage is the chameleon, who moves slowly through the branches seeking out its insect diet, swiftly devoured by a flick of its long sticky tongue. At the far western reaches of the Algarve, the stunning promontory of Cape St Vincent juts proudly out into the Atlantic. Thought of as the end of the earth in Roman times, where the sun sinks deep into the western seas, this is a focal point for important bird species. Shearwaters ride the waves just off shore above dolphins surfing the Atlantic rollers.

Thekla larks strut with their resplendent crests on the cliff top scrub and the shrill ‘kyow’ of red billed choughs ring out as the glossy black birds wheel in the cliff top winds. As the lighthouse throws its beams out into the western reaches, alpine swifts fill the air in an evening spectacle of avian mastery.  In the autumn, the cape draws birds of prey as a last stop shop prior to a crossing south to Africa. Kettles of circling griffon vultures circle of the thermals and montagu’s harriers quarter the open ground for their mammal prey . All along the coastline, a very special bird may be found, the azure winged magpie. This species is a special treat to see with its blue wings flashing in the sunlight as it moves from tree to tree in single file uttering its distinctive ‘zreeeeee’ calls. Moving north around the cape hidden  bays and inlets provide shelter for purple herons and little bitterns that hide amongst reed beds.

Black redstarts flick their russet tails on the cliffs above Odeceixe, another great location to scan for dolphins. Moving into the Alentejo region, cork oaks dot the hillsides and on quiet days the distant ‘hooo hooo’ of the hoopoe may be heard. To see this crested salmon pink bird with its broad pied butterfly like wings is always a delight. Egyptian mongoose is frequent in the region, occasionally seen rushing across a footpath. Nocturnal genet cats also thrive here, though you would be very lucky to see this wonderfully marked carnivore. Inland, the star bird is the black winged kite, and its European stronghold is the open plains of the Alentejo. Look out for a medium sized slivery grey raptor hovering in search of its prey. All in all, this whole area is a naturalists delight, and I never tire of searching for the many lizards that rush amongst the boulders, watching the lazy flight of swallow tail butterflies or scanning the skies for birds rare or non-existent out with the region.

The whole country is a delight for the travelling naturalist and I cannot wait to go back! You do not have to travel far out of Reykjavik to spot special species, and indeed the Tjornin lake in the capital is often filled with locally interesting birds such as scaup and whooper swans, normally associated with open coasts and large wetlands in a wintery UK! Moving into the interior the swiftly rushing turbulent streams and rivers are the haunt of that most wonderful of ducks, the harlequin. Boldly striped in whiteand black on a slate blue background with deep chestnut flanks, the ducks are a real treat to watch as they dive for their prey.  If you are lucky you may even spot the other duck speciality, the Barrow’s Goldeneye, known locally as the ‘house duck’ but found on open lakes in summer.

A second glance at the gulls that wheel around the harbours will reveal the almost ghostly glaucous gull, it’s pure white wing tips giving it an almost ethereal appearance as if ‘Jonathan Livingstone Seagull’ himself had arrived! Another sea bird of note is the arctic tern, which migrates further than any other species, all the way from the Antarctic to breed on Iceland. Keep an eye skyward for very special birds of prey. Dashing merlins, the size of a thrush, thrill as they hunt over the open ground. The impressive gyr falcon is an awesome sight soaring and diving on the more remote rocky coasts and the snowy owl with its bright yellow eye staring out from its pristine white plumage is surely the icing on the cake. Mammals are harder to find at least on land, though you may be very lucky and see an arctic fox on a foray for food. Sea mammals are much easier to get to grips with and a whale watching adventure from Reykjavik may produce sightings of up to 23 species including minke whales, humpbacks and even orcas! 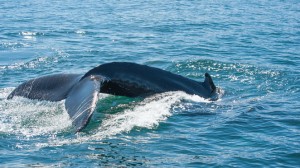 Iceland is a perfect destination for the discerning wildlife fan.

Browse our website to see our variety of walking and cycling adventures.

Getting out into the remoter parts of any our destinations on foot or by bike is the ideal way to get up close and personal with all aspects of nature and wildlife!