Wildlife on the West Highland Way

When you are undertaking a walking holiday in Scotland, or indeed anywhere, one of the main attractions is the wildlife that may be encountered en route. The West Highland Way offers great scope to view and experience wildlife along its entire length and a little knowledge of what to expect can add an extra dimension to the walk. Here is an overview of some of the key species: 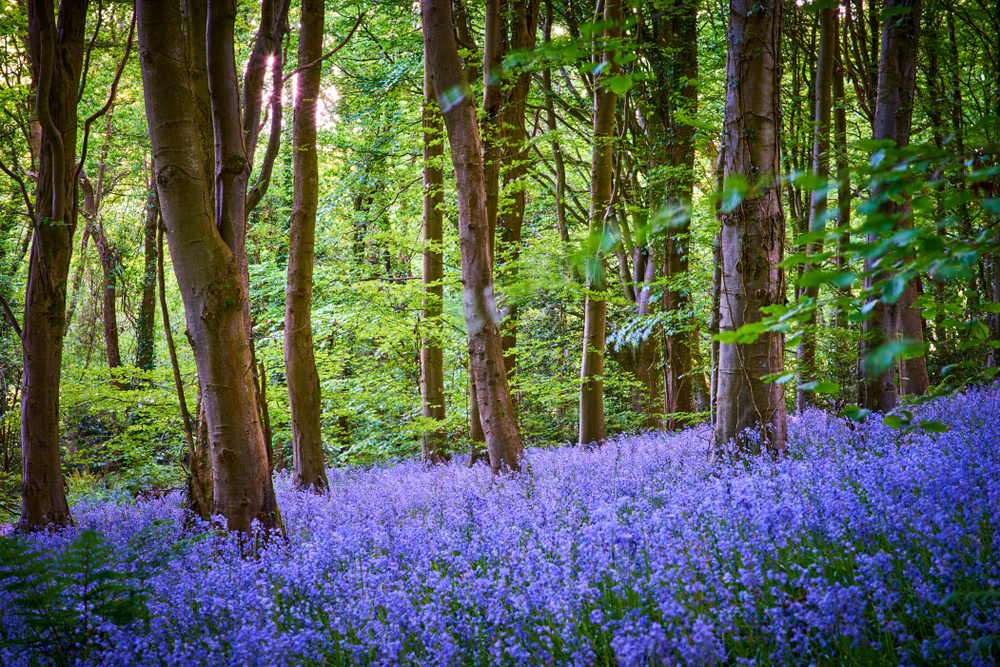 Milngavie – Drymen - You are welcomed with wildlife almost immediately on your first day. If you happen to be walking in spring, then as you walk through Mugdock park you will be able to see plenty of bluebells which attract woodland butterflies. Throughout spring and summer listen for Chiffchaff's and Willow Warblers. If you are lucky, you may even see some birds of prey. Once you come through Mugdock Country park and just before you reach Craigallian Loch you will be greeted with your first view of Dumgoyne and the Campsie Fells. Keep your eyes peeled from here until you are walking in shadows of Dumgoyne as Kestrels and Buzzards are often in this area.

Drymen to Balmaha - As you cross the moor approaching Conic Hill, keep a look out for the - hard to spot - Red Grouse amongst the heather. Also often found along the trail and near the tracks around here are common lizards. Once you are upon Conic hill you will have another chance to spot some Buzzards and likely some Ravens too. On the way down the hill keep your eyes towards the woods as amongst the conifers you should be able to see Siskins and if you are particularly lucky perhaps an elusive Crossbill. As you are passing through the woods it is worth looking out for the little ponds which often contain palmate newts. In the UK we only have 160,000 red squirrels left, with around 120,000 of them calling Scotland home. It is becoming harder and harder to spot our endangered little friends but within the woods and trees surrounding Balmaha and Conic hill you will have your first chance of the trek to spot them. 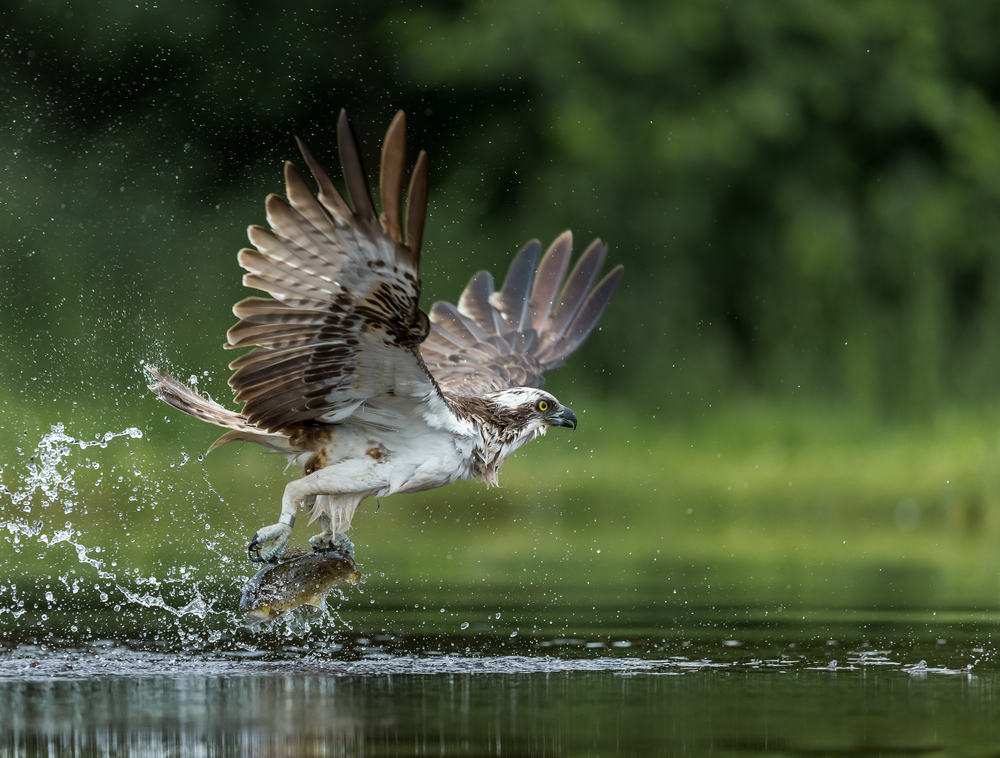 Balmaha to Rowardennan - As this area is a favourite feeding spot for Ospreys, this small section offers you the best chance to spot these majestic birds of prey fishing. Within the surrounding woodland, migrant spring and summer birds such as Chiffchaff's, Redstarts and Wood warblers, who have made the journey from Africa, fill the trees. Redstarts are often seen "pumping" their rusty red tails as they flit amongst the greenery. On the tracks themselves, you may also be lucky enough to see the distinctive green Garden Tiger Beetle.

Rowardennan to Inversnaid - In the trees today, look out for pied flycatchers, tree pipits joining the same species you were looking for around Rowardennan yesterday. Very occasionally Golden Eagles grace the sky’s flying around the peaks. Take the occasional glance upwards to see if their 2.3m wingspan makes an appearance. While walking through the forest today if you are quiet and hear some light rustling in the leaves you may be lucky enough to spot some red deer. 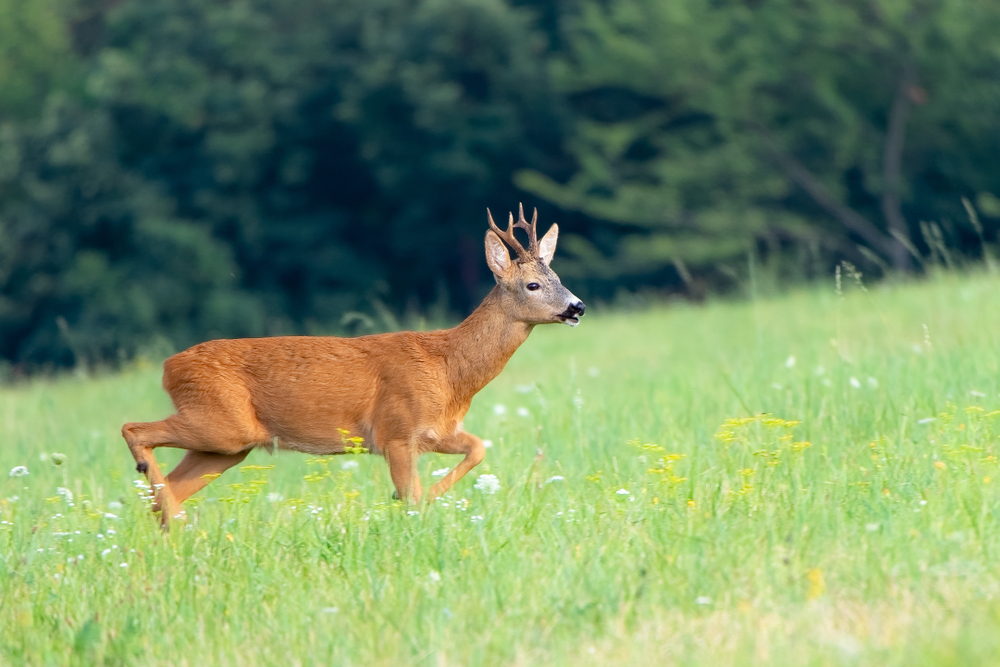 Inversnaid to Inverarnan - There are often feral goats resting on the beaches at the end of the loch. If you are lucky enough to be here at the same time as these agile creatures it makes a wonderful photo with the Loch as the backdrop. The feral goats are a somewhat contentious issue. Not native to Scotland they are believed to have arrived from mainland Europe many decades ago. They are popular with tourists and are interesting animals to see but they have been quite destructive, so much so that the International Union for Nature Conservation lists feral goats as one of the 100 worst invasive non-native species globally. Every few years the controversy arises again as culls of the population are required. They are lovely to see as they hop around the mountains and Loch enjoying life completely oblivious to the controversy around them. There is a good chance of seeing birds of prey today with this area being popular for Buzzards, Peregrine Falcons and Golden Eagles. Hiding in the woodland surrounding the loch Britain’s smallest deer, the little Roe Deer forage for food, while the larger Red Deer graze the peaks to avoid being disturbed.

Inverarnan to Crianlarich - Walking through Glen Falloch today offers a different landscape and different opportunities for wildlife. Again, you will be able to look out for Roe Deer and Red Deer along with Buzzard's Peregrine's and Golden Eagles. However, what will be more prevalent will be Glen Falloch's bats. Flying through the glen these brown furry little bats are popular for a very good reason. The Daubenton Bat's main source of food is the pesky little midge. You are likely to spot them when the sun is lower, so early morning or in the evening. 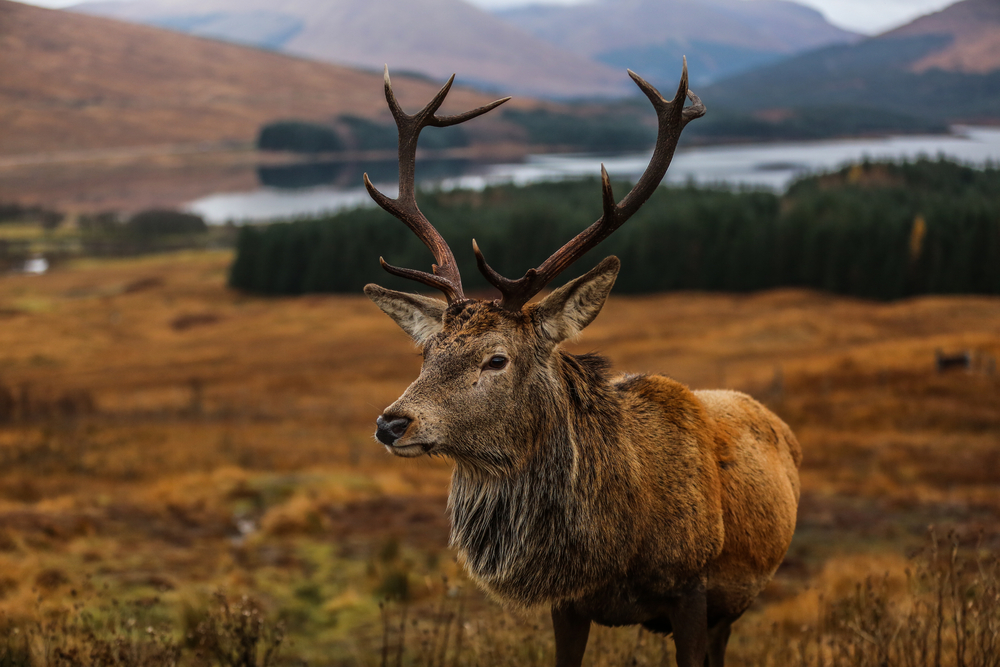 Crianlarich to Tyndrum - In this section of walking your chances of spotting Red Deer greatly increase. If you are lucky you may even see a stag with their large fierce antlers. Depending on your approach, the deer may stand and stare back at you or turn and sprint away. As they are running off you will see their cream white rumps bounding away. Much of the same wildlife you have seen in previous sections can be seen but you will also be given the opportunity to see a very uniquely talented little bird called the Dipper. If you wish to spot these little birds, then as you near Tyndrum and are walking close to the river, keep your eyes on fast moving rapid water. The Dippers with their distinctive white breast dive under the water in search of their prey. Tyndrum to Bridge of Orchy To add to your ever-growing list of wildlife, from Tyndrum on you will start to see a change in the Crows. Instead of the plain black Carrion Crows, you will now see the grey body and black head of the Hooded Crow. Tyndrum is almost on the line where these two birds’ territories meet. For a short section, you will see the results of interbreeding with some crows sporting mixed grey and black body plumage. 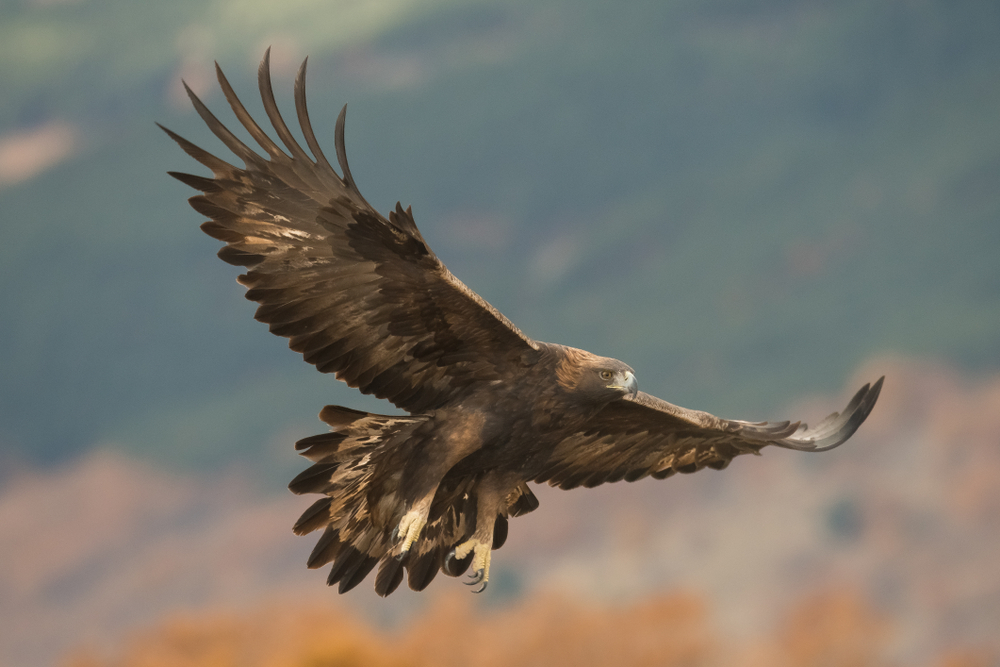 Bridge of Orchy to Inveroran - As you are now entering the Highlands proper, you will notice a change in the landscape as you delve deeper into the hills, heather and bogs of the upcoming Rannoch Moor. You should have clearer chances of spotting birds of prey as you come over the small hill after Bridge of Orchy. Hopefully, you will also spot some Red Deer, particularly around Inveroran Hotel. Inveroran to Kingshouse Crossing Rannoch Moor today you will have plenty of chances to once spot many of Scotland's bird of prey. Across Rannoch Moor sparrow hawks, hen harriers, hobbys (small falcons) and kestrels can be seen along with the usual suspects golden eagles, buzzards, ospreys and peregrines. There is an abundance of Red Deer in the area and you may be lucky enough to see the "Monarch of The Glen" a proud red stag. 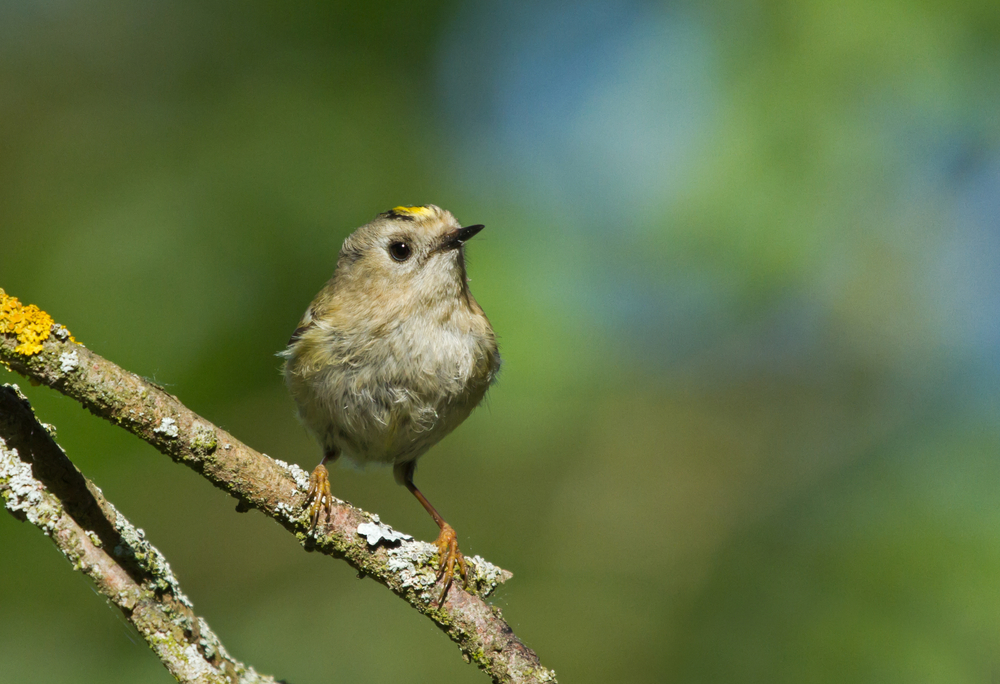 Kingshouse to Kinlochleven - You will likely have seen them this morning, and don’t need us to point them out, but around Kingshouse is by far your best opportunity to see Red Deer, including stags. These deer have become a little too used to humans being in their environment so can come very close. A photo of "the Monarch of the Glen" (a stag) with the iconic Buachaille Etive Mor mountain as the backdrop makes an excellent memento of your trip. Shortly after leaving Kingshouse, you will have a great chance of spotting both the "famous" red grouse and also the black grouse usually found within the heather. From here you will also start spotting the largest of the Crow family, the Ravens, who act like our vultures are scavengers who will strip the meat off any carcasses lying around. They usually travel in pairs and you will hear their guttural "kronk" when they fly by.

Kinlochleven to Fort William - You will have the chance to spot more birds of prey today but also keep your ears open for the high-pitched calls of the coal tit and Europe's smallest bird, the Goldcrest within the woodland. The tiny little Goldcrest weighs only 4-6 grams (0.15-0.22 Ounces) and measures only 8.5cm (3.3 inches) tall. Unbelievably the tiny Goldcrest incubates up to 12 eggs at once and females can have 2 broods in a season. They have green/brown bodies with, hence the name, a golden crest on their head.

If you require any more information on the West Highland Way, you can also download our free guide.

Share this:
Tags
West Highland Way Walking Scotland Scottish Highlands
Call us on +44 141 530 5452
Get in touch by Email
Contact a specialist Live Chat