COVID-19: Read The Latest Advice For Our Travellers

67
Camino Guide Part 3: Which Pilgrimage Route? - Camino Frances
Do you have any questions?
Call us on +44 141 530 5452
Contact a specialistLive Chat
Written by

PART 3: WHICH ROUTE SHOULD I TAKE

Primarily the Camino Francés, Portugés and Via Podiensis (Le Puy Route) are more suited to first-time pilgrims as there is a well established infrastructure and clear waymarking supporting these routes. The less popular Camino Levante and Via de Plata offer the returning pilgrim new challenges and experiences travelling over 1000km from the South of Spain. 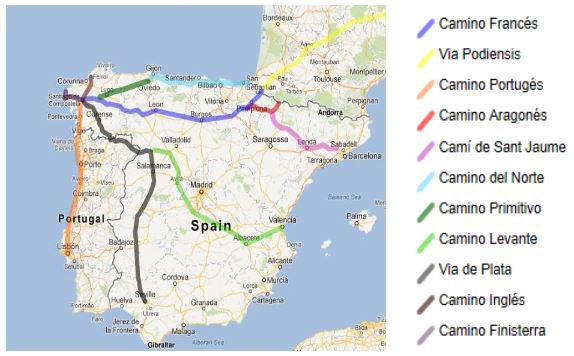 It is not only distance that can offer a challenge to returning pilgrims, the relatively short Camino Primitivo also attracts adventurous pilgrims due to its steep climbs and descents on mountain paths. The Camino Primitivo is the continuation of the coastal Camino del Norte, which offers an enjoyable alternative to the mainly landlocked routes. There are many other routes that can be travelled as part of a longer Camino such as the Camí Sant Jaume, which connects with the Camino Aragonés to later join the Camino Francés. The Camino Inglés is the shortest route, starting in the towns of A Coruña and Ferrol which no more than 110km away from Santiago. As well as routes to the Santiago de Compostela, there is an extension to Finisterre on the Galician coast. Traditionally, it was the end of the pilgrimage to Santiago de Compostela.

The Camino Francés is the most popular and well-known pilgrimage to Santiago de Compostela. The route starts in the beautiful town of St Jean Pied de Port, in the French Pyrenees, where it takes 780km to reach Santiago de Compostela. After the spectacular scenery of the Pyrenees, it passes through northern Spain’s green countryside, traditional villages and the impressive cities of Pamplona, Burgos and Leon.  Throughout the journey, pilgrims are never far from historical sites such as the 9th-century church at O’Cebreiro and the medieval Cathedrals of Burgos, Pamplona and Leon. Although walking the whole Camino Francés from St Jean Pied de Port takes 36 days, it can be shortened into stages which begin at the main cities and towns along the way. Pros:

Cons: Accommodation is in high demand during the summer months. Which Pilgrimage Route Should I Take? Look out for our next post on the Via Podiensis / Le Puy Route to Santiago. Should you require any more information about walking the Camino, please don't hesitate to contact us, or browse the different routes to Santiago on the website.

This post is an extract of our complete Guide to the Camino which you can download here: Free Camino Guide

Share this:
Tags
Camino Pilgrim Trail Walking
Call us on +44 141 530 5452
Get in touch by Email
Contact a specialist Live Chat