Wales is home to many wild, rugged and tranquil landscapes, so it is no wonder that they have been a source of inspiration for many Welsh authors and poets. Here we’ll take a closer look at two of Wales’ most famous writers and the areas that inspired them.

Perhaps Wales’ most famous poet, Dylan Thomas was born in Swansea in 1914. His popular poetry, such as ‘Do not go gentle into that good night’, as well as his turbulent personal life, penchant for partying, and emotive readings cemented his legend. Although he did leave Wales at times to earn a living in London, the threat of German air-raids on the capital during the war soon drove Thomas and his family back to the Welsh coast. At Llangain, he was inspired to write “Holy Spring” and “Vision and Prayer”. He then moved further north to New Quay, a seaside town on the beautiful Ceredigion Coast. It is said that the landscapes of New Quay inspired ‘Under Milk Wood’, a radio drama which was later adapted for stage and film. In between various sojourns in London and visits to the States, Thomas’ final homestead was the Boathouse in the town of Laugharne, on the Carmarthenshire coast, just south of Pembrokeshire. Here he continued to write until he died while on a trip to New York. He was only 39. His body was returned to Wales and is buried in Laugharne. The Boathouse is now a museum dedicated to Thomas’ memory, on display are memorabilia, some original furniture and the writing shed where Thomas spent much of his time. Every year Laugharne holds a festival in Thomas’ honour and this small town attracts a range of literary and creative stars, it is a must do for all Dylan Thomas fans and is a good opportunity to combine a walking trip on Wales’ famous Pembrokeshire Coast Path! 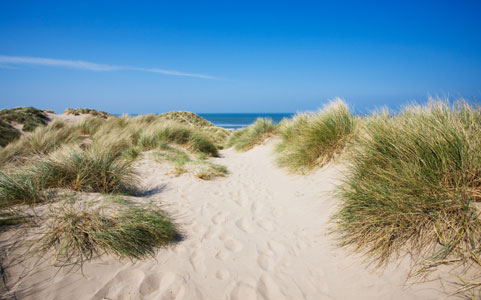 Sand dunes on the Ceredigion Coast, where Dylan Thomas spent a year during the war.

Roald Dahl was born in Cardiff in 1916 to Norwegian immigrant parents. He is best known for his children stories, the most famous of which include Charlie and the Chocolate Factory, James and the Giant Peach, Matilda and The BFG. Dahl was raised and educated in Wales and later at a public school in England. It is said that during his time at boarding school he was incredibly homesick for Wales and wrote to his mother every week. Dahl went on to become a fighter pilot in the RAF during the Second World War and had postings all over the world. He went on to marry an American actress. During and after his travels, Wales remained close to his heart. As a child, the Dahl family holidayed each Easter in the harbour town of Tenby on the Pembrokeshire Coast. He continued this tradition with his own children. The cabin where they stayed is still in the possession of the Dahl family and is available to rent as a holiday home. Dahl also spent time in Laugharne and was inspired by the energy of the town and of course by Dylan Thomas. After visiting Thomas’ Boathouse he built his own ‘writing shed’ at his home. Dahl pays homage to Thomas by including one of his poems in his book Matilda. Dahl died at the age of 74 in 1990 and is buried in England. In Cardiff Bay the Oval Basin plaza was renamed Roald Dahl Plass in his memory.

If you are interested in exploring the landscapes and haunts of Dahl and Thomas, why not combine this with a self-guided walking holiday in Wales? For more information look here. 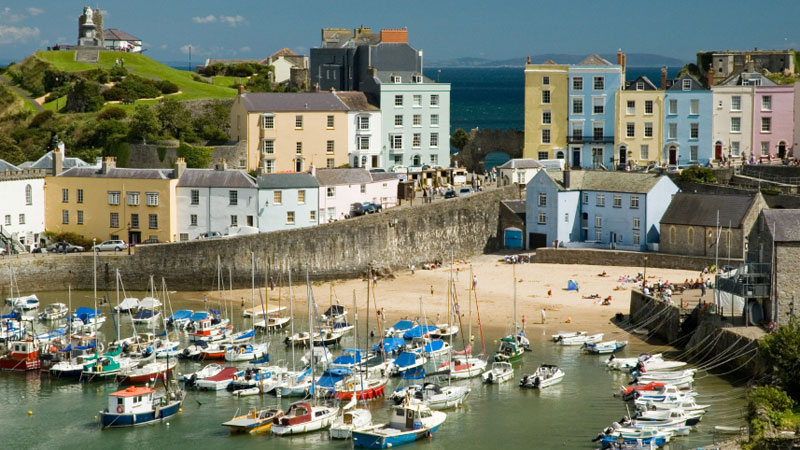 The colourful harbour of Tenby, one of Dahl's favourite holiday destinations.

Share this:
Tags
Wales Walking Cultural Activities Pembrokeshire
Call us on +44 141 530 5452
Get in touch by Email
Contact a specialist Live Chat