67
Biking in Nova Scotia: My Top Four Highlights
Do you have any questions?
Call us on +1 720-487-9898
Contact a specialistLive Chat
Written by

Nova Scotia - in eastern Canada - is a cyclist's dream. The old railroad paths have been converted into gravel bike paths. A cyclist of any level of riding experience can easily travel from town to town along the Province’s South Shore. These pathways are the site of remarkable landmarks and legends, giving your biking experience an intimate perspective of the region, people, history and depth.
Here are the four highlights from my trip to Nova Scotia:

Nova Scotia enacted prohibition laws from 1921 to 1930. During this time, bootlegging and rum-running became a popular way to supply illegal alcohol to buyers throughout Nova Scotia. Clever sailors with knowledge of the various small bays and coves brought rum and other alcohol from offshore. They used the trails to secretly transport it into the cities. The bike trail through the south shore follows this former rail line with plenty of towns along the way.

Probably the best example of a modern-day treasure hunt is Oak Island, which has been a place of intrigue and mystery for centuries. This small island on the south shore is believed to be the location of a massive treasure. Treasure hunters have been trying to unlock the mysteries of the island for hundreds of years. Oak Island is the subject of an ongoing History Channel television show called “The Curse of Oak Island” and active treasure hunting is still happening on the island.

The town of Lunenburg is a UNESCO world heritage site, showcasing a prime example of planned British Settlement in Canada. This small coastal town is full of classic shops and restaurants. It's a great place to visit for anyone who loves colonial architecture. Another historic piece of Lunenburg is the Bluenose II. The Bluenose was a racing schooner built in Lunenburg that was an important Canadian symbol in the 1930s for its ability to win races, specifically against American sailing ships during competitions. It’s also featured on the country’s 10 cent coin. A replica of the ship was built and is on display in Lunenburg, taking on the name Bluenose II.  The Bluenose II has one of the largest mainstay sails of any schooner. It's a great place to take a tour to better understand the sailing culture of Nova Scotia.

This small fishing village is a favorite location of travelers. It has one of the most iconic lighthouses of the area: the Peggy’s Cove Lighthouse. Peggy’s Cove is a great day trip to talk a walk through history and understand what the fishing villages of Nova Scotia were like before modern technology. 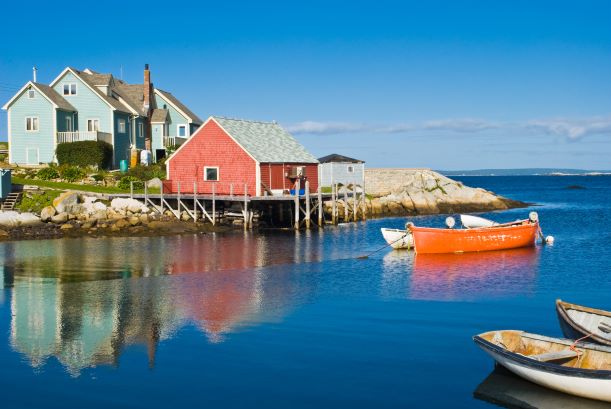 Peggy's Cove Nova Scotia
Share this:
Tags
Canada Inn to Inn Cycling Cycling
Call us on +44 141 530 5452
Get in touch by Email
Contact a specialist Live Chat