Hike the Dingle Way, Ireland’s most scenic trail, once described by National Geographic as “the most beautiful place on earth.” This diverse landscape found while hiking the Dingle Peninsula offers impressive vistas at every turn, from the crashing waves and golden sandy beaches to the rolling green hills of Conor Pass. Gain a unique insight into this Gaeltacht (Irish speaking) region that is rich in history and culture.

Reach the top of Mount Brandon, the highest point on the Dingle Peninsula, and discover panoramic views to the rocky coastline. Listen to local musicians in one of the cosy pubs of Dingle town while sampling a refreshing pint of Guinness. Take in some of the finest coastal walking between Ventry and Slea Head, a true highlight of this trip. This is a landscape that has inspired major film directors to visit and capture it. The route is dotted with ruined castles, ancient standing stones and ‘Clocháns’ (Beehive Huts) that date back to 6000BC. Experience the most spectacular scenery of the southwest of the Emerald Isle, the Dingle Way truly invigorates the senses...

We offer a choice of itineraries completing the full walk in 10 or 8 days or choose to soak up the most scenic sections, savour a golden whiskey at Dingle Distillery, and stay in welcoming hotels on the Best of the Dingle Way walking tour. Or, if you're short on time, spend five days exploring the best walks, sampling whiskey, and relaxing in cosy hotels on the Dingle Way Getaway in Comfort. 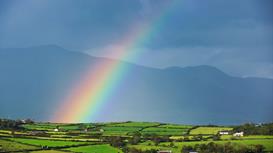 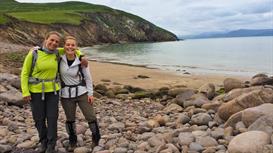 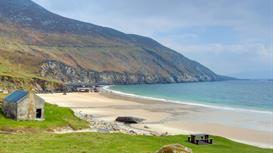 88 Reviews
The Dingle Way - 8 Days & 7 Nights
Walk the Dingle Way, through arguably some of Ireland's most beautiful scenery
From $1,150.00
More Info 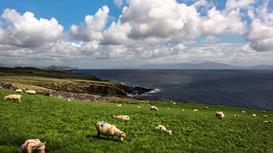