Blessings Along "The Way" - Part 6: Arriving Into Santiago

Today was the day we had been walking for…our arrival into Santiago and to see the Cathedral of Saint James. Little did I know when I started making reservations that this year had been declared a holy year (the next is 2021) and many of the churches along “the Way” had been open that were normally closed. The special door at the Cathedral was opened and we would arrive on the day of the Pilgrim mass to receive the Pilgrim Blessing. 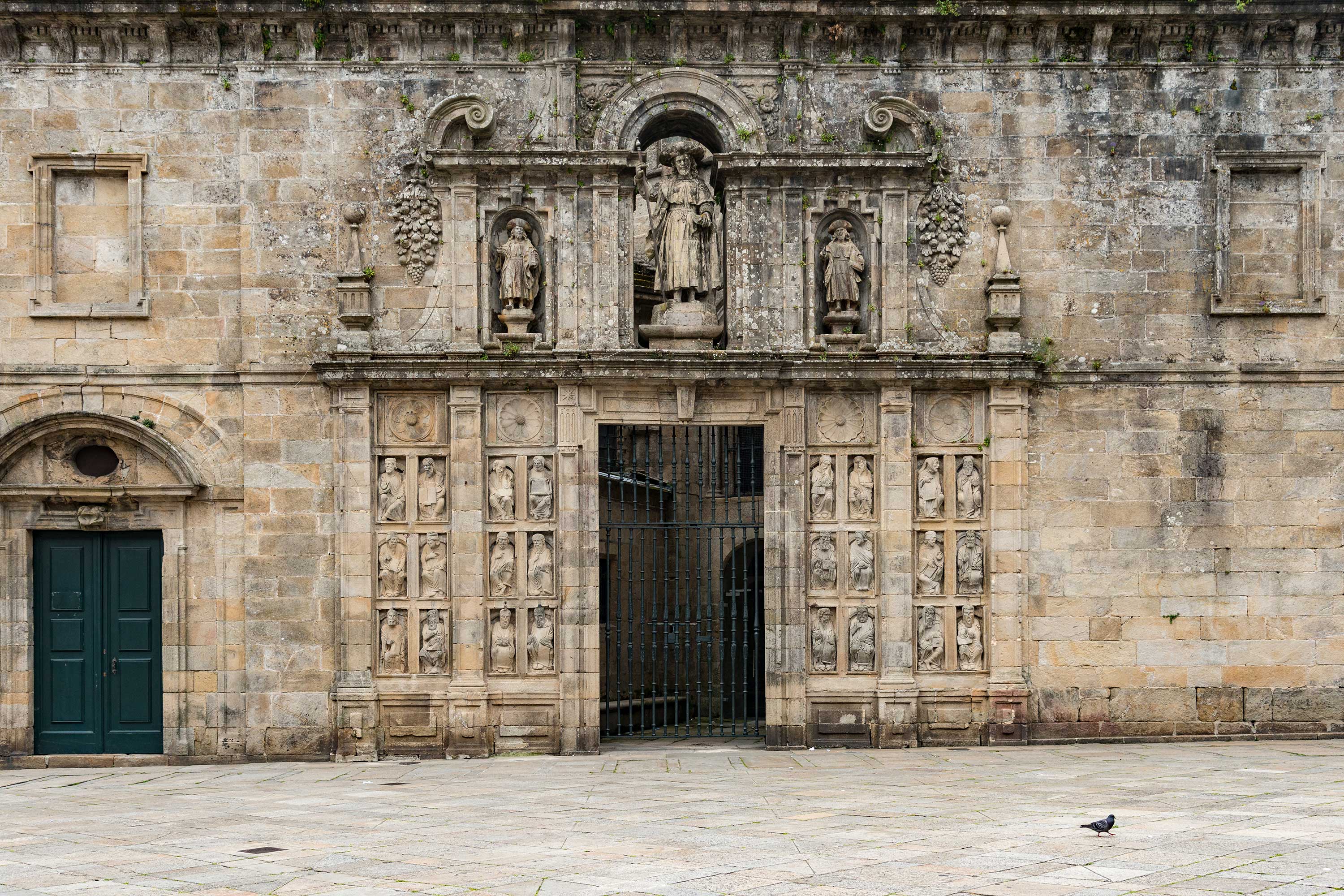 On the 13th of December 2015, the Archbishop Barrio of Santiago de Compostela opened the Holy Door of his Cathedral under the recommendation of Pope Francis in honor of the 2016 Jubilee Year of Mercy. This is an extraordinary event as the Holy Door is only to be opened on Jubilee Years, when the Feast of Saint James, the 25th of July, falls on a Sunday.

According to Catholic traditions, walking the Camino on a Holy Year or during the 2016 Year of Mercy and entering the Cathedral of Santiago through the Holy Door gives believers plenary indulgence. (Note: There are certain steps that have to be taken to receive the plenary indulgences and not being Catholic, neither Charlotte nor I received this). 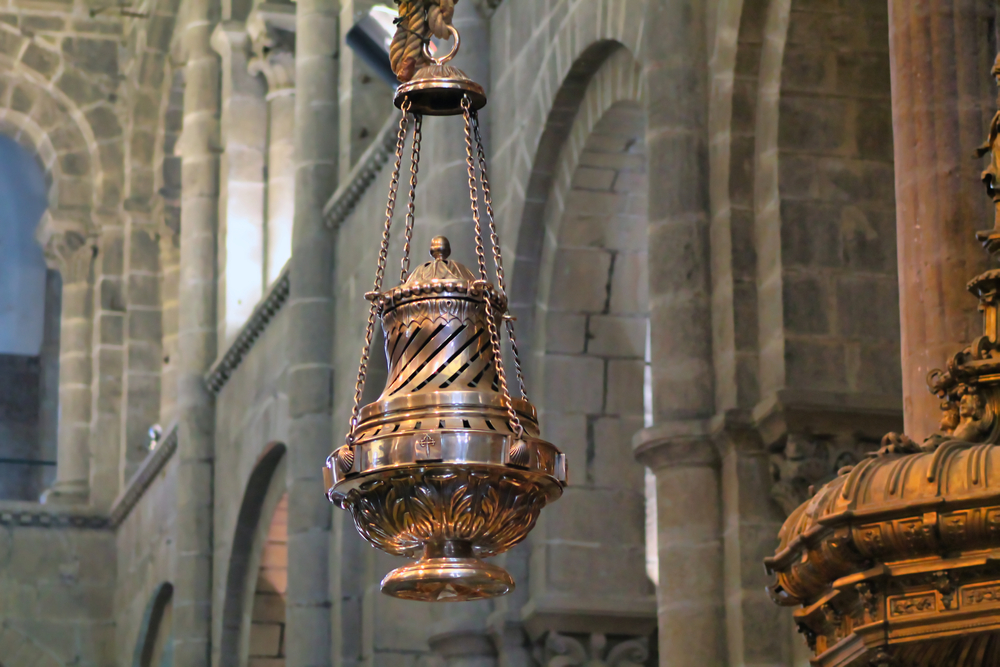 Our last morning of walking the Camino was dark and dreary with light rain falling. Having had such beautiful weather for most of our walk, it would make our walk into Santiago more memorable.
A lovely breakfast and that last sip of delicious coffee, we put our rain gear on and out the door we went, headed for Santiago 20km or 12.4 miles. Once we crossed the main road that led into Rua on our left, the path took us into the forest where the terrain was rolling hills. The outside temperature was somewhat chilly with the rain, and walking in our rain gear, we realized it was easy to get overheated. It seems even though our rain gear said it breathed…it must have had a stuffy nose, as my rain poncho did not breathe. 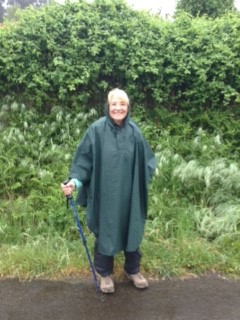 We were picking up more pilgrims now, some individuals walking with umbrellas and school children that were walking just for the day. The rain continued to fall and the path became muddy with water running along the sides giving all the ferns and greenery a newly washed look in every shade of green you could imagine. 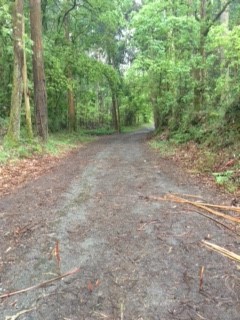 It was raining just hard enough that we needed our rain gear on but we were dripping wet inside as well from the humidity and heat we were generating going up and down the rolling hills. We stopped about noon at a little covered eatery and got some coffee and ate our power bars. We decided to take off our rain ponchos while we sat and when the cool air hit us, being wet, we were now cold. Note to self: don’t take off rain gear when sitting outside when my clothes are damp/wet. Refreshed but chilly, rain ponchos back on, we started back on the path, into the rain and walked through small villages along the way where people had left rocks and mementos. It was along this stretch that Charlotte left a few special items. 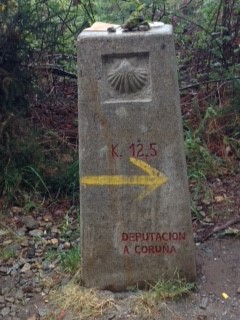 Picking our way through puddles and mud we climbed up a small hill and came to the large modern sculpture that marks the place from where we could see the Cathedral of Santiago for the first time. The sculpture is known at “Mount Joy” and yes, it was a blessing and an emotional moment for me as I realized that I had in fact realized my dream of walking the Camino, to be standing there, to see our destination for the first time. The rain even stopped for the time we were there on this mount. 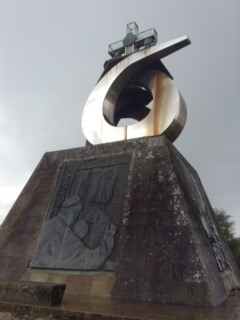 After gazing out and down into Santiago, the rain began again, signaling we needed to make our way down the hill. Eventually we came to a flight of steps, and to the motorway where there was a very old marker for the Camino. 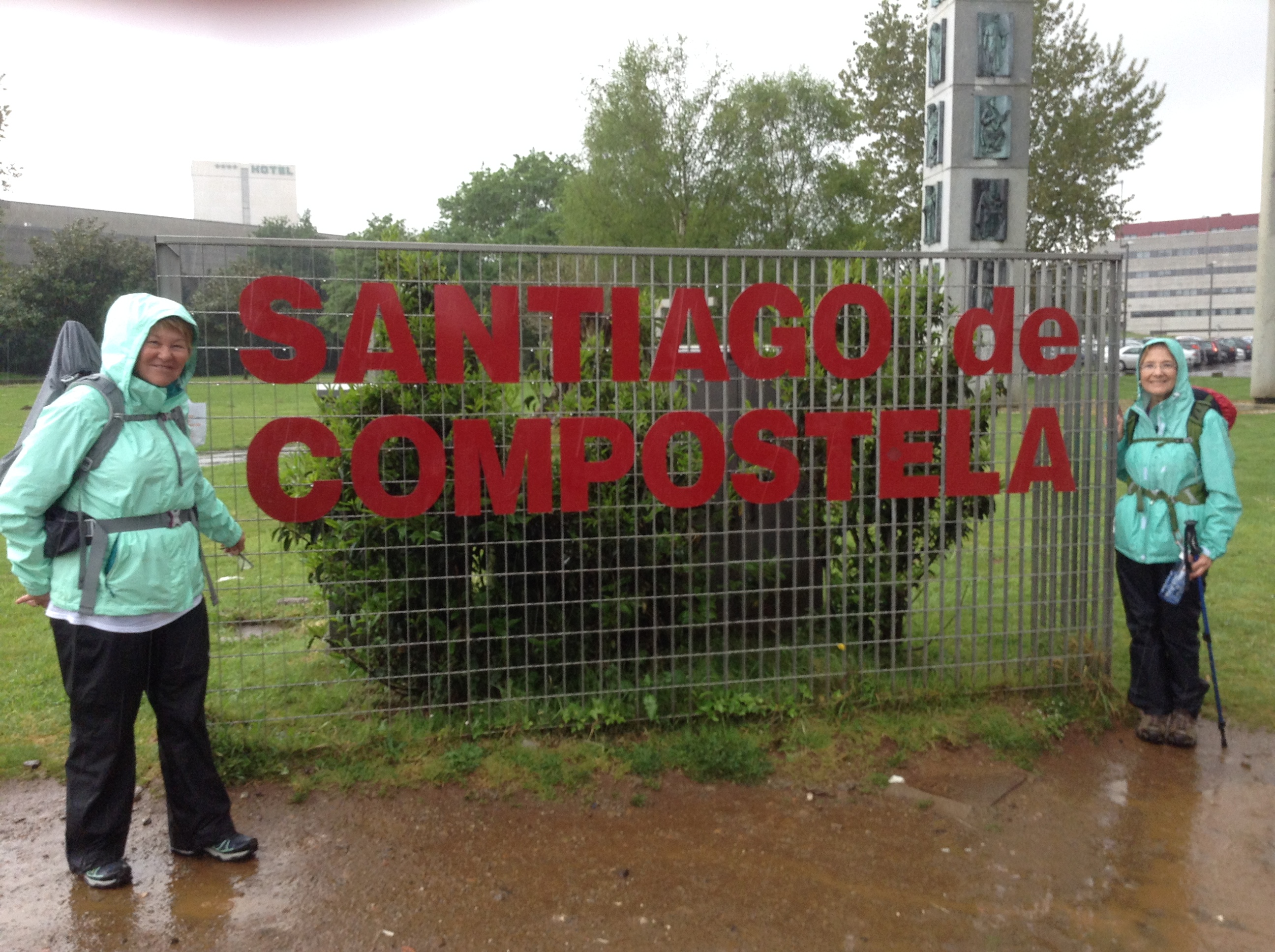 Following the path on the left we found our way into town, crossing the bridge over the motorway and to the sign we had been waiting for.

Wet and ready to find our accommodations, I got out my directions for the Hotel, A Tafona De Peregrino at Virex da Cerca 7. Believe it or not, we actually did not get lost finding our hotel, a welcomed blessing as we were wet and tired. The most difficult part was navigating the large town of Santiago to get to the traditional market area as our accommodation was near there. Checked into our accommodations, we saw our bags and sighed a sigh of relief as we both wanted and needed dry clothes. I would encourage anyone to have Macs take your one bag for you as our bag was always at our next destination and dry not matter the weather. We had a great room and we were able to hang our wet clothes pretty much everywhere to dry out before we headed back out into the rain to attend the evening Pilgrim Mass. 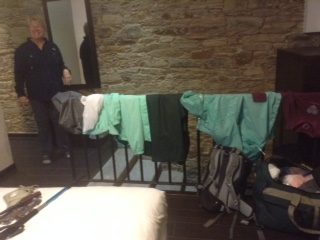 Dry clothes and damp rain gear on, we set out again looking for the Cathedral in the rain, realizing that we were going to probably be wet again sitting for the Mass. As we approached the Cathedral from the side, under an archway was a young man playing such lovely music, touching my heart and realizing another blessing. Charlotte dropped a few euros in his case as we walked around to the front of the Cathedral to the square. Scaffolding hid part of the entrance, so we found a side entrance and entered the Church. A feeling of awe engulfed me as this was the same church where Pilgrims from times past had come to receive blessings. We found a wooden pew where we sat to listen to the Mass that was all in Spanish. (Note: Backpacks are not allowed in the Cathedral). The cathedral is beautiful and it was chilly sitting there in the evening as the stone walls and floors held the dampness and chill from the rain in spite of the number of people who were attending.
We were able to watch the “Botafumeiro” get filled with the incense and then swing high and back and forth across the alter area. I could not think of a more amazing blessing than to be able to experience this night with so many other pilgrims from around the world, each with their own stories and memories that they would carry home with them for the rest of their lives.

Sitting there, I thought of all those who had gone before us and all those who would come after us, each finding their own Blessings Along the Way. 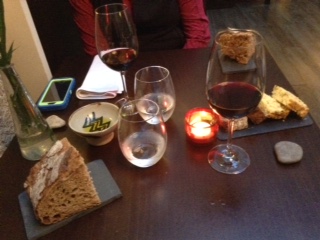 Back into the wet night after the mass, we found a lovely little café and enjoyed a light dinner with a celebratory glass of red wine. Physically and emotionally tired I was looking forward to a good night’s sleep, but found it difficult as I kept recounting all that had taken place since we arrived in Sarria on the train and since I had crossed the Pyrenees in France. Tomorrow we would appear at the Pilgrim’s Office to get our Compostela’s. Where had the time gone, how could this amazing adventure be coming to a close?

There are two types of certificates (Compostela): one is in Latin, and is issued to pilgrims who declare that they did the Camino for religious or spiritual purposes. Your name will also be written in Latin. The second certificate is for those who did it for cultural or historical purposes. This one is written in Spanish. Both are a testament that you have walked the Camino de Santiago. Charlotte and I arrived at the Pilgrim’s office, and showed our stamped Passports to men standing outside the courtyard. We were then allowed to go into the building to stand in line for what seemed like a very long time. There were pilgrims sitting on the floor with their packs next to them, others standing and leaning on walking sticks who had walked straight through from St Jean Pied de Port in France weeks ago and just arrived, as well as one’s who had walked from Sarria like Charlotte. Others who like me had walked the Camino in sections so had come from other starting points along the Way. There were also those pilgrims who were stopping just to get their Compostela before walking on to Finestra, the End of the World at the Atlantic Ocean. 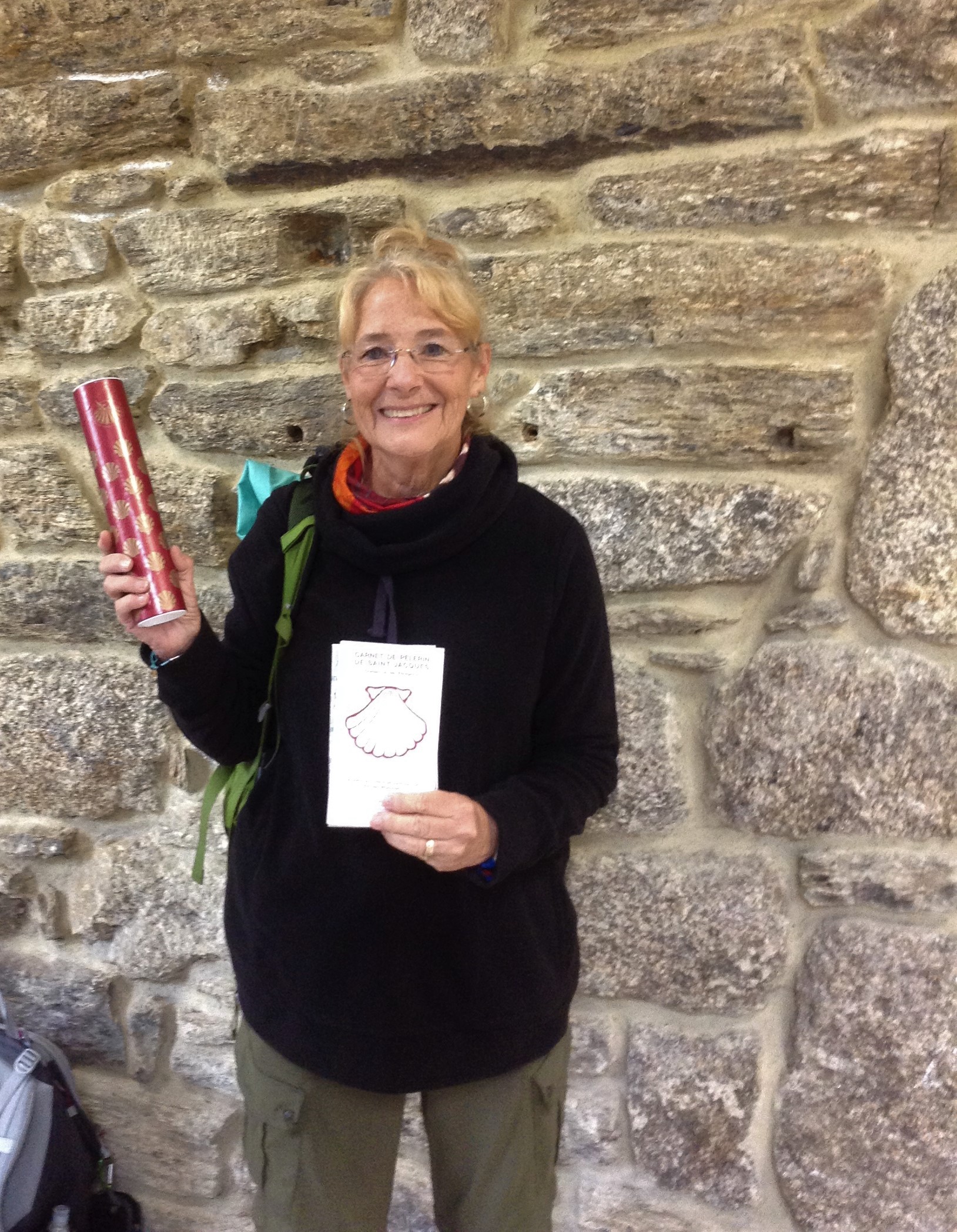 Sandi with her Compostela

My Compostela was written in Latin for I declared I had walked for spiritual purposes. Written in Latin, my name is “Alexandram” as they did not have the name Sandi in Latin. We paid the small fee and it was now time to have a wonderful lunch.

After our last lunch on the Camino we headed off to explore the old section of Santiago where I bought a small silver scallop shell to go on my necklace that held the Basque cross that was given to me before I began walking in St. Jean Pied de Port, France. 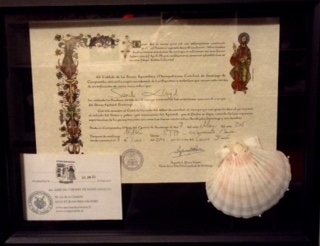 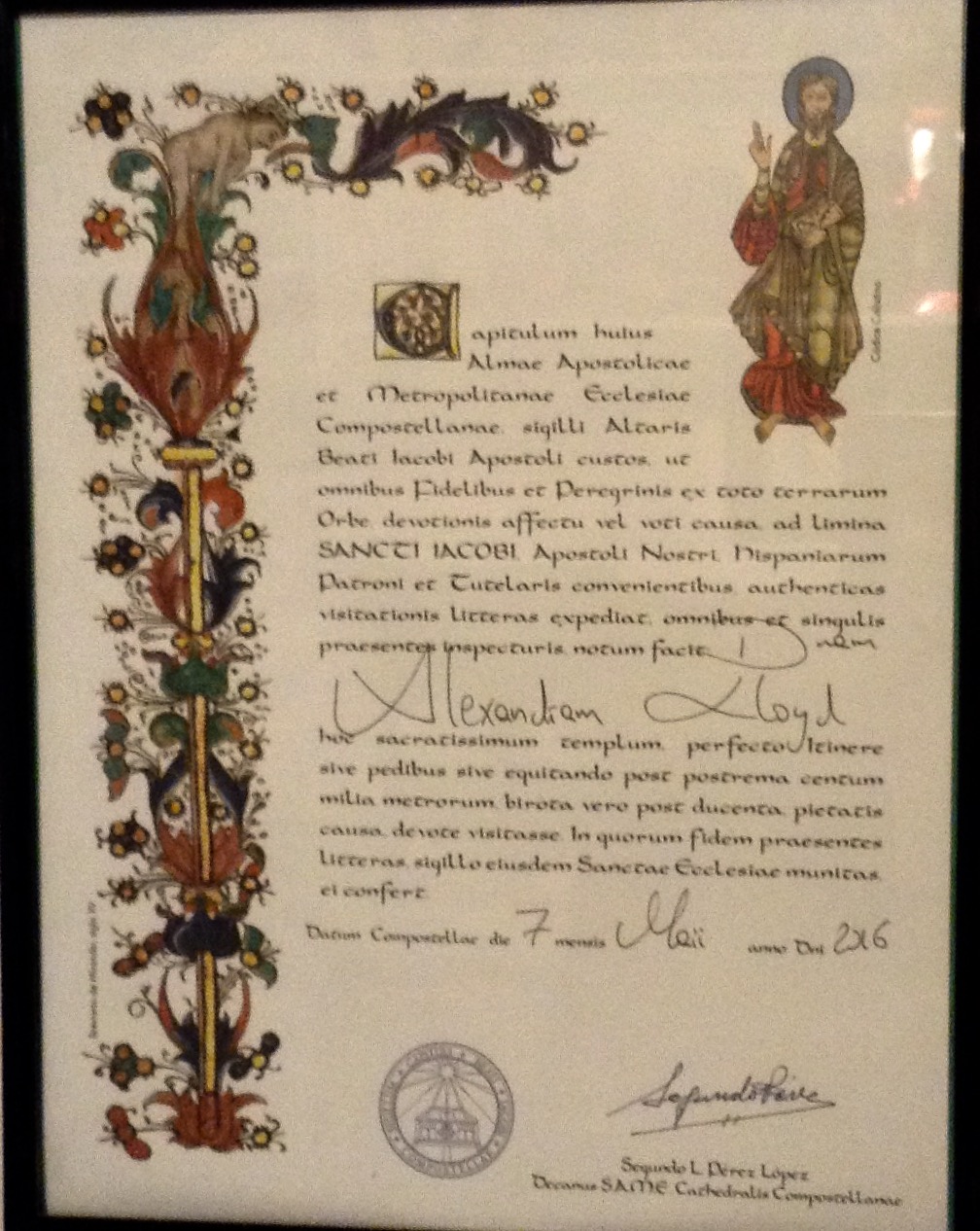 Once home, I framed my Compostela.

Begin Sandi's journey from the start with her Day 1 blog, or find out more about walking the life-changing Camino on Macs Adventure's website.