Visiting Lucerne for the Day

Make the most of spending a day in Lucerne. The city sits on Lake Lucerne and is surrounded by impressive mountains making it a destination like no other. You should try to spend as much time as possible outdoors, enjoying the city’s beautiful architecture and breathtaking scenery. Here are a couple of suggestions of what to do when visiting.

Go for a long stroll along the shore, take your time and enjoy the gorgeous scenic views of the fourth largest lake in Switzerland. Cross the Chapel Bridge (Kapellbrücke), it is a covered wooden pedestrian bridge across the Reuss River, connecting the Old Town north of the river with the new town to the south. The oldest truss bridge in the world and the oldest wooden covered bridge in Europe, Chapel Bridge is an important historical landmark, constructed in 1333 as part of the city’s fortifications. The bridge is also notable for the paintings that were added in the 17th century, mostly depicting important events and scenes from Swiss history. 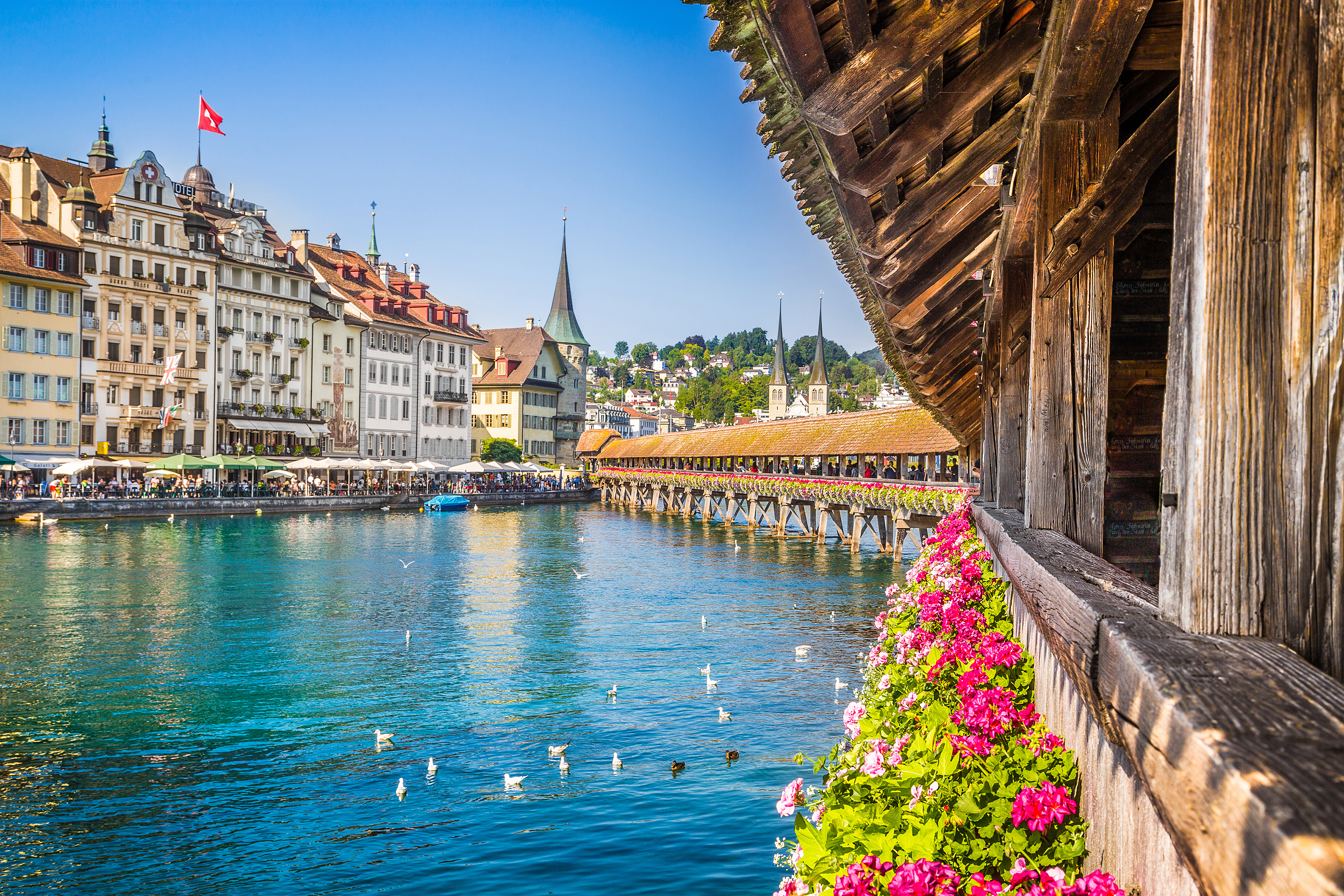 Once you’re on the other side, you’ll find yourself in Lucerne’s Altstadt, one of the most beautiful Old Towns in all of Europe. Explore the quaint pedestrian-only streets lined with historic half-timber houses and old ornate façades. Walk to St. Peter’s Chapel (Peterskapelle) as soon as you cross the bridge and discover vibrant streets lined with charming shops, cafés, and restaurants. The old town still has old market Squares and most notable, the Weinmarkt, the square where the Canton of Lucerne swore a federal oath in 1332 and united with the cantons Schwyz, Uri and Unterwalden.

Walk to the Hofkirche St. Leodegar church, a historical church in Lucerne whose two slim Gothic towers can be seen from anywhere in the city, especially from the lakeshore. Near to the church find the Löwendenkmal (Dying Lion Monument), it is the oldest figurative monument in Switzerland and a beloved landmark among locals and visitors alike. It was designed by Bertel Thorvaldsen and carved by Lukas Ahorn in 1821 to commemorate the regiment of the Swiss Guard that was massacred by French revolutionaries in 1792 while defending King Louis XVI. A total of 760 soldiers died. The inscription under the sculpture reads “To the loyalty and bravery of the Swiss.”

Take a Boat Tour on an Old Steamer

Across from the main train station, there is a dock with old Steam Boats. They are historic paddleboat steamers that take visitors on sightseeing boat trips on the lake and also connect Lucerne with the small towns and villages on the other side of the shore. Put your feet up and take a tour around the lake whilst being blown away by the beauty of the region. 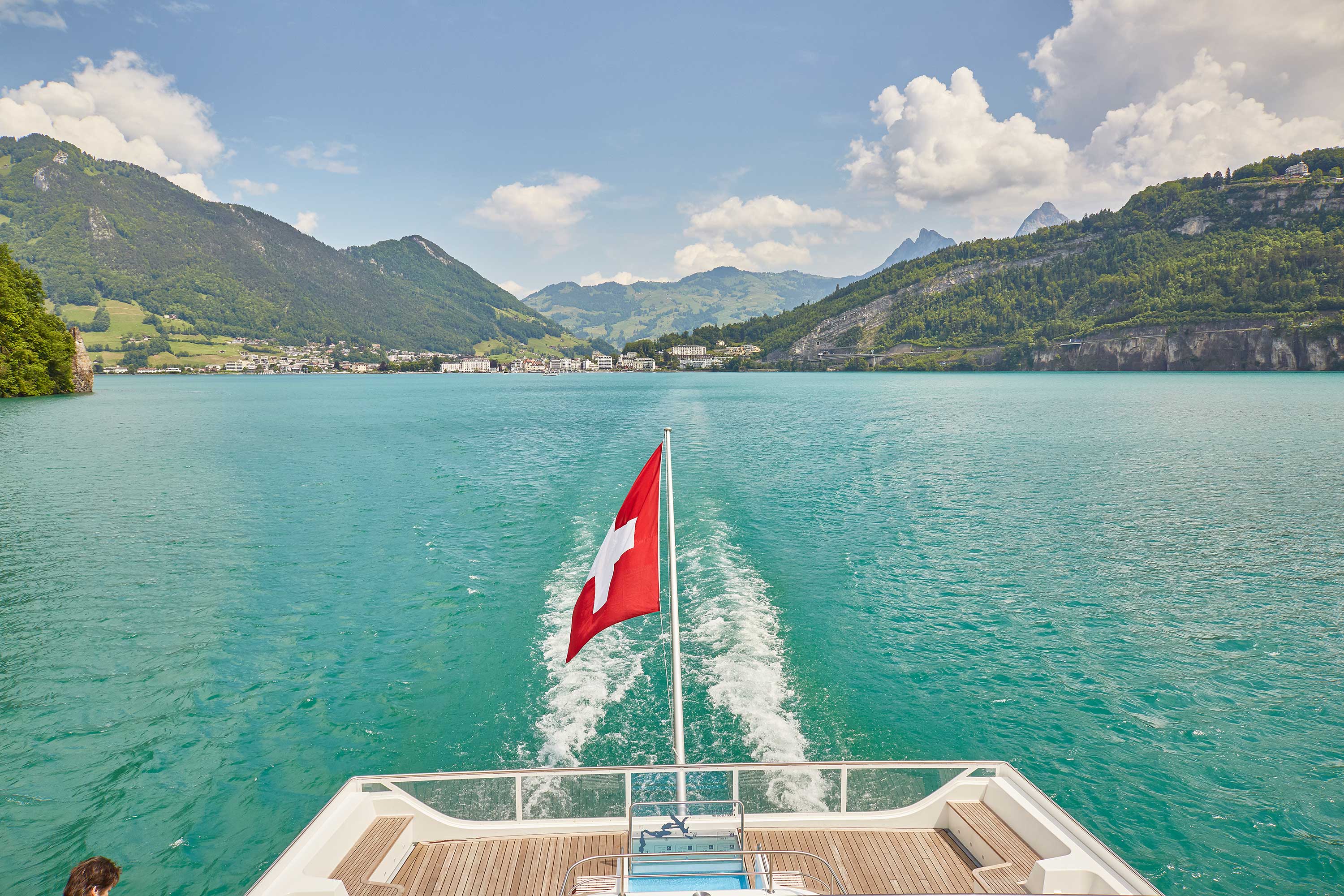 Visit a Museum –Wagner, Sammlung Rosengart Museum or the Swiss Museum of Transport

Visit the Sammlung Rosengart Museum, which houses a large collection of priceless 19th and 20th-century art, with a particular focus on Pablo Picasso. You can learn everything about the period between Impressionism and Classic Modernism, when Picasso, Paul Klee, Henri Matisse, Fernand Leger, George Braque, Joan Miró, and Marc Chagall marked an entire epoch and irrevocably changed the world of art.

The Swiss Museum of Transport is one of the most popular attractions in the country, called locally, Verkehrshaus der Schweiz (“Transportation House of Switzerland”) and can be found a short bus ride away from the centre. Discover the history of swiss transport in this interactive museum

There are several great restaurants with authentic Swiss cuisine under the ramparts. Visiting one of these places is high on the list of things to do in Lucerne if you are looking for the complete experience, alternatively head into the Old Town and visit the renowned Stadtkeller, a lively restaurant which celebrates everything Swiss.

Share this:
Tags
Lucerne Switzerland
Call us on +44 141 530 5452
Get in touch by Email
Contact a specialist Live Chat