Walk of the Week: The Great Glen Way

Geology is a funny old game.  The devastation that comes from two tectonic plates colliding doesn't sound like the best place for a walking holiday, but give it a couple of hundred million years and you are on to a winner.  Yes, this week we visit the site where two plates clashed and there formed the series of lochs that pretty much splits Scotland in two.  This prehistoric drama formed what is now, the wonderful and intensely beautiful Great Glen Way. 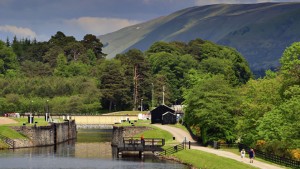 The Caledonian Canal at Laggan Lock

The trip is very well waymarked and a lot of it is on canal-side and loch-side paths that are flat and easy going. However, there is the occasional steep incline, particularly when you are leaving the little towns along the way. The paths are in a really good condition and we offer lots of different ways to explore the route, with an In Comfort version, a Short Break and even if you would prefer to cycle instead of walk, then you can try the Great Glen Cycleway.

The trip starts in Fort William, the adventure capital of the Highlands and home to Ben Nevis, UK's highest mountain.  This is also the finishing point for the West Highland Way and many people choose to combine the two trips on a two-week adventure.  You then saunter, more or less from coast to coast, over to Inverness in the East, walking along the banks of three lochs, Loch Lochy, Loch Oich and the famous Loch Ness. 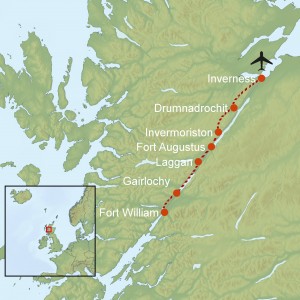 Map of the Great Glen

Walking in Scotland is restricted to the months of March - October due to the weather.  It can be potluck in Scotland whether you are going to get good weather or not, but when the sun shines there are very few places in the world that are more beautiful. I would probably suggest April - Early June and September as the best months to go.   These tend to have the better weather and from April to Early June you are not likely to be bothered by the notorious midge.  While there is plenty of protection available from these little flying menaces and the fact that they can't fly as fast as you can walk, life is still much better when they are not around.

The Great Glen Way is a wonderfully chilled out part of Scotland.  While you will still meet fellow walkers, it is a lot quieter than the West Highland Way.  The little villages along the route are a real highlight, with Fort Augustus and Drumnadrochit being two of the larger ones. The accommodations that we use are wonderful, really friendly hosts who know the area inside out and are often happy to share a few little secret places to look out for.  The scenery is breathtaking, with loch-side paths looking over these big bodies of water that are fringed by the dramatic Highland mountains. 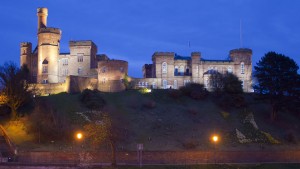 Your Finishing Point at Inverness Castle

There is also a bit of monster hunting to be done should you be inclined.  Don't believe it exists?  Have a look at Invermoriston on Google Maps satellite view.  If you go to the right of the town, over the Loch, you will see a little white dot.  Zoom in on this and you will see that even Nessie can't escape the overseeing eye of Google.  In Fort Augustus or Drumnadrochit, you can take trips out on Loch Ness, or head round to explore the iconic Castle Urquhart, situated right on the banks of the Loch. 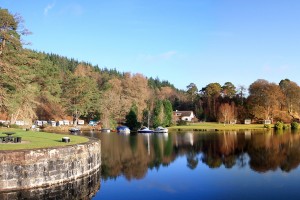 Gairlochy, Your First Stop on the Route

There is also a great tradition for locally produced, Highland fare on this trip, with each place you stay happy to provide you with or recommend somewhere to have a delicious meal along the route. There has also been a resurgence in Scottish Brewing in the last five years, providing an array of interesting beers to compliment your wonderful meal.  Not to mention the potential for a wee nip of whisky to see you off to bed. The Great Glen Way is an immense Highland escape and one which we couldn't recommend highly enough.  It is easy enough to do as your first long distance walking trip, but beautiful enough to walk even if you are a seasoned veteran.

Share this:
Tags
Great Glen Way Scotland's Great Trails
Call us on +44 141 530 5452
Get in touch by Email
Contact a specialist Live Chat