67
Scotland’s Most Beautiful Beaches
Do you have any questions?
Call us on +1 720-487-9898
Contact a specialistLive Chat
Written by

Scotland is loved for many things... rugged mountains, iconic lochs, warming whisky, fresh seafood, and mysterious castles. In 2021 Scotland celebrates its spectacular coastlines and surrounding waters during Visit Scotland's "Year of Coasts and Waters". Along a coastline that stretches for 18,672 kilometers, you will find some of the world’s most beautiful and deserted beaches. The sweeping white sands against the clear blue waters of some will remind you of those in exotic destinations. Let's have a look at a few then, shall we?

Where? Near John O’Groats, Caithness on the North Coast

When it comes to Duncansby Head, you really do get an unforgettable view! The small but beautiful beach looks out over two large sea stacks, the Duncansby Stacks, and a rock arch called the Thirle Door. This is also the northernmost point of the mainland where you can find an impressive lighthouse and you can see as far north as Orkney.

Visit Duncansby Head on our North Coast 500 or Grand Tour of Scotland itineraries. 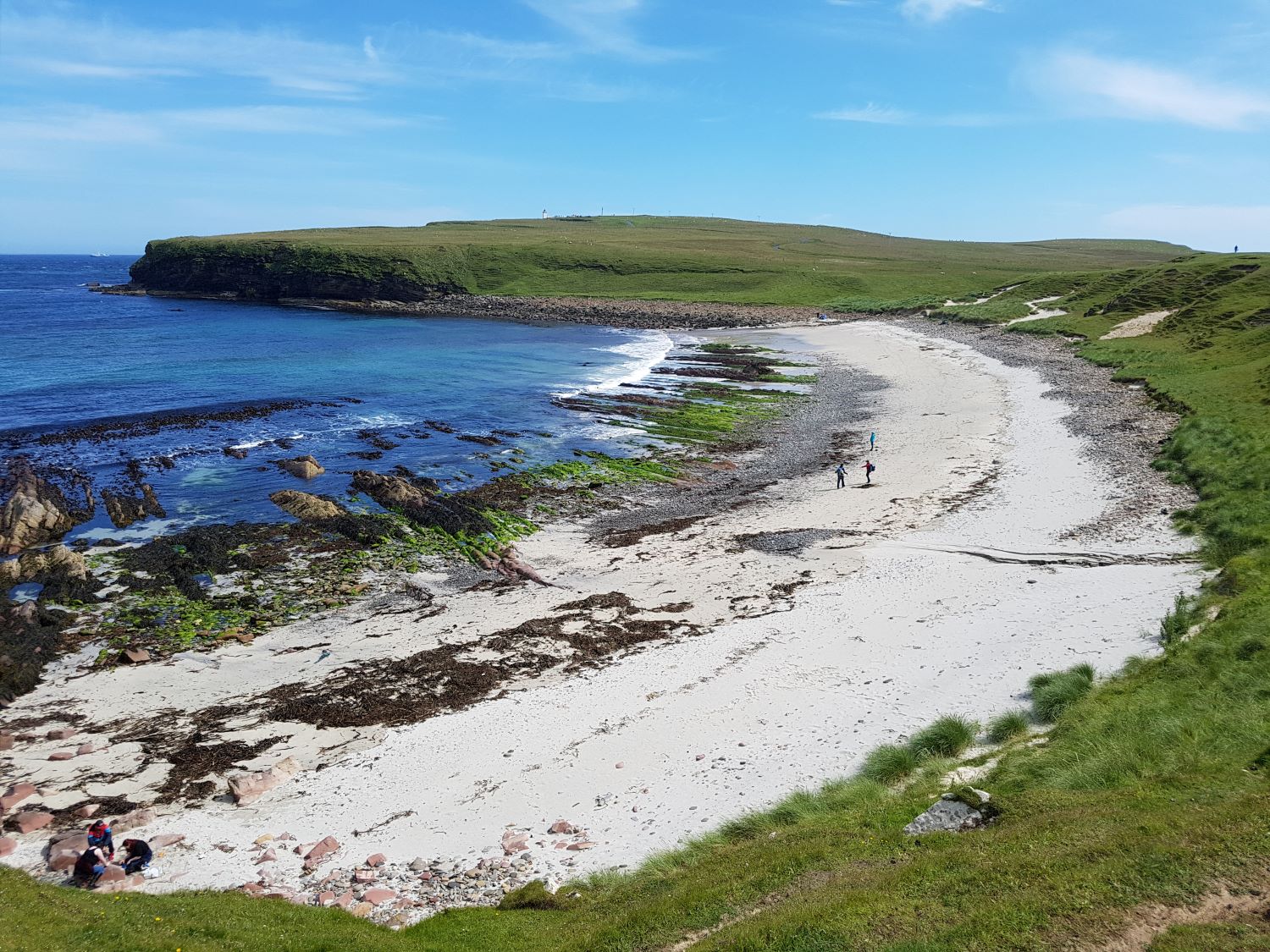 Where? The Inner Hebridean Island of Mull on the West Coast

The Inner Hebridean Island of Mull is home to a tiny hamlet called Calgary where you can find a very accessible beach that is one of the largest in North Mull. Pause for a locally produced ice cream at Robin’s Boat, a small shop built in an upturned boat. 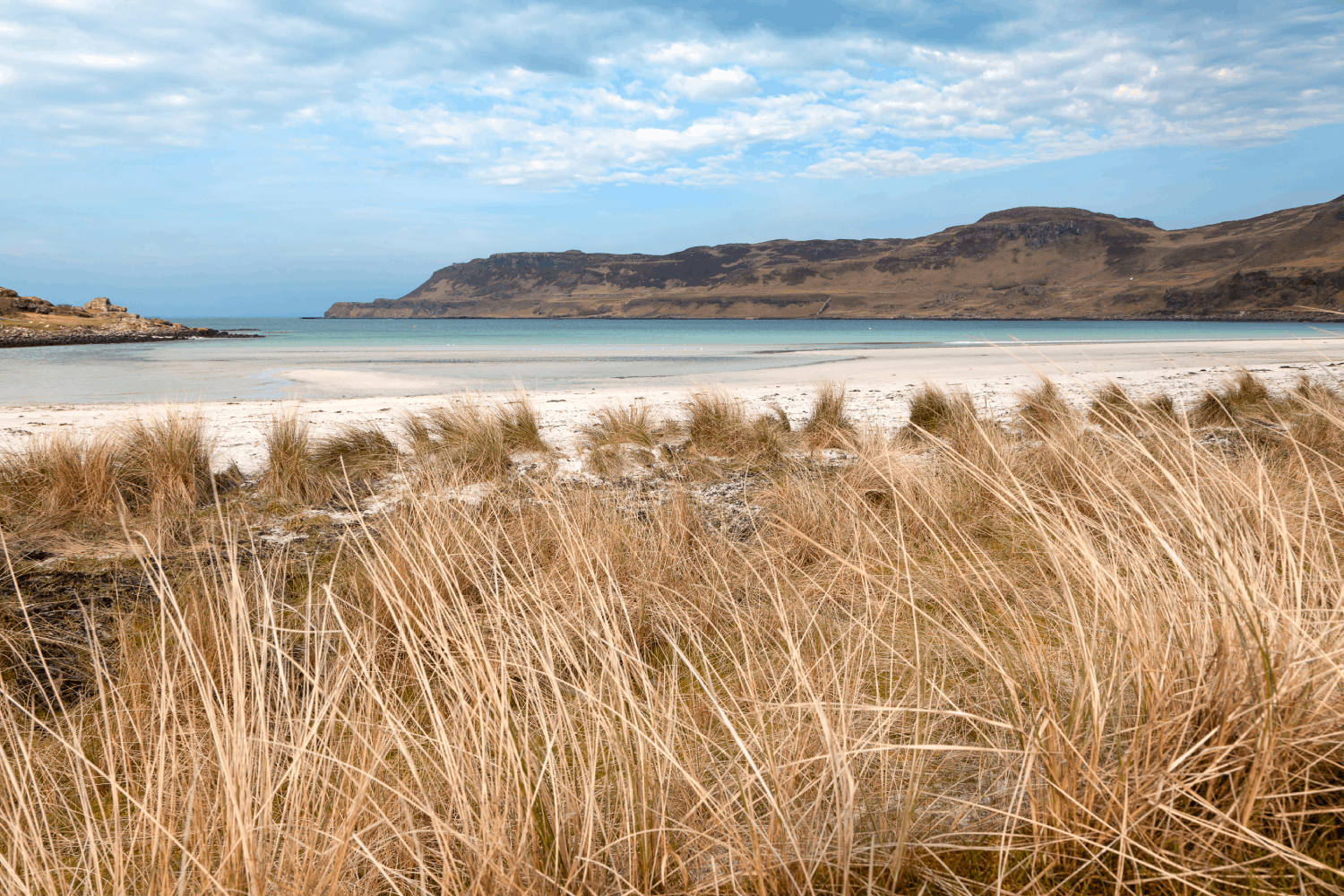 Where? Dunure in Ayrshire on the West Coast

Any Outlander fans will recognize the beach and its castle, having featured several times in season 3 of the series. Dunure is a small fishing village roughly 5 miles south of Ayr in Ayrshire. There is a picnic area and car park, perfect for a little break while gazing out over the scenery.

(If you've seen the series and would like to bring Outlander to life, go check out our Outlander Trail!) 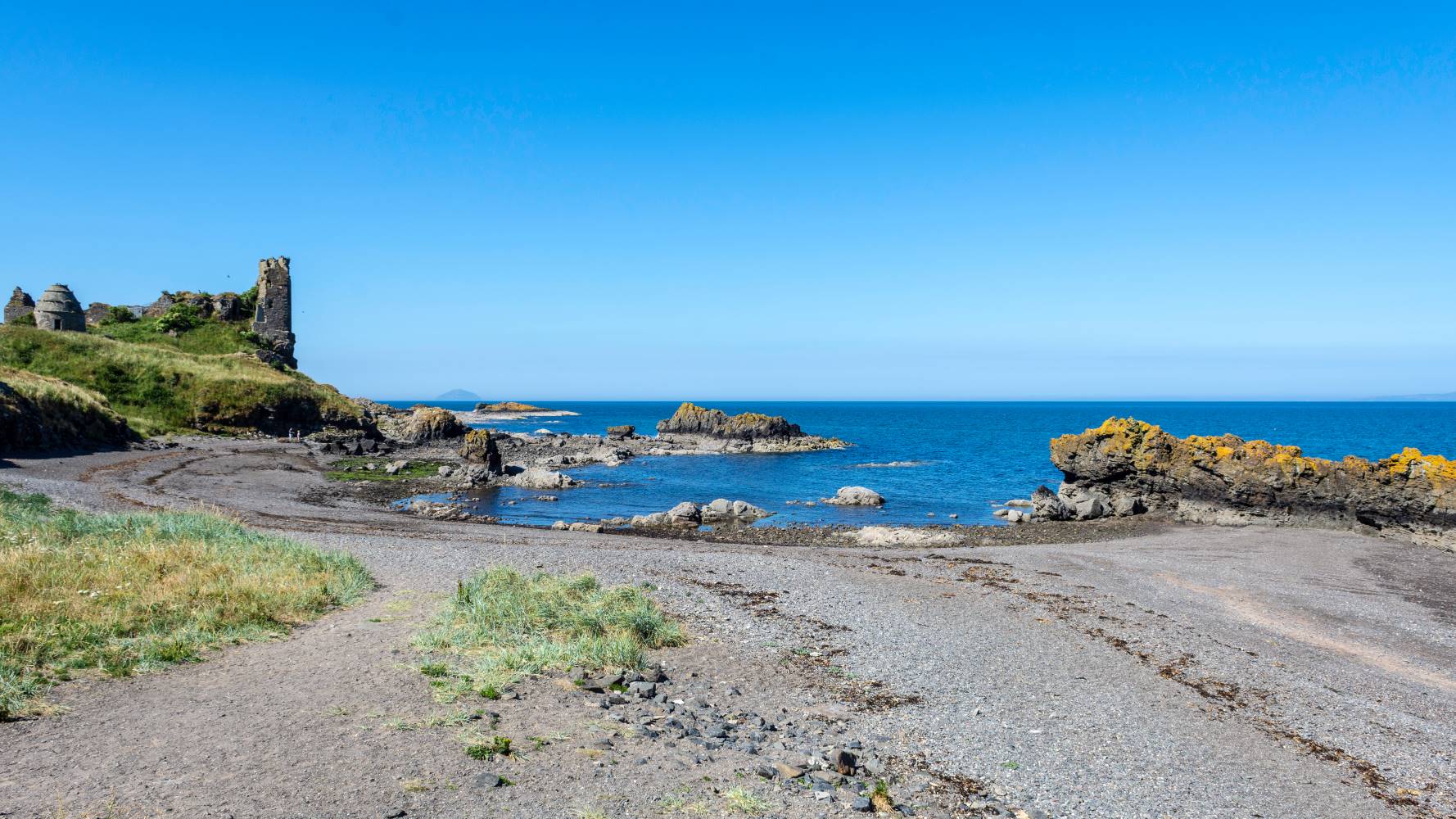 Where? St Andrews in Fife on the East Coast

This long sandy beach is pretty unique in the sense that it has the Old Course, known as the oldest golf course in the world, to one side and the blue sea to the other side! St Andrews is also home to the third oldest university in the English-speaking world, making this a must-see beach and coastal town. 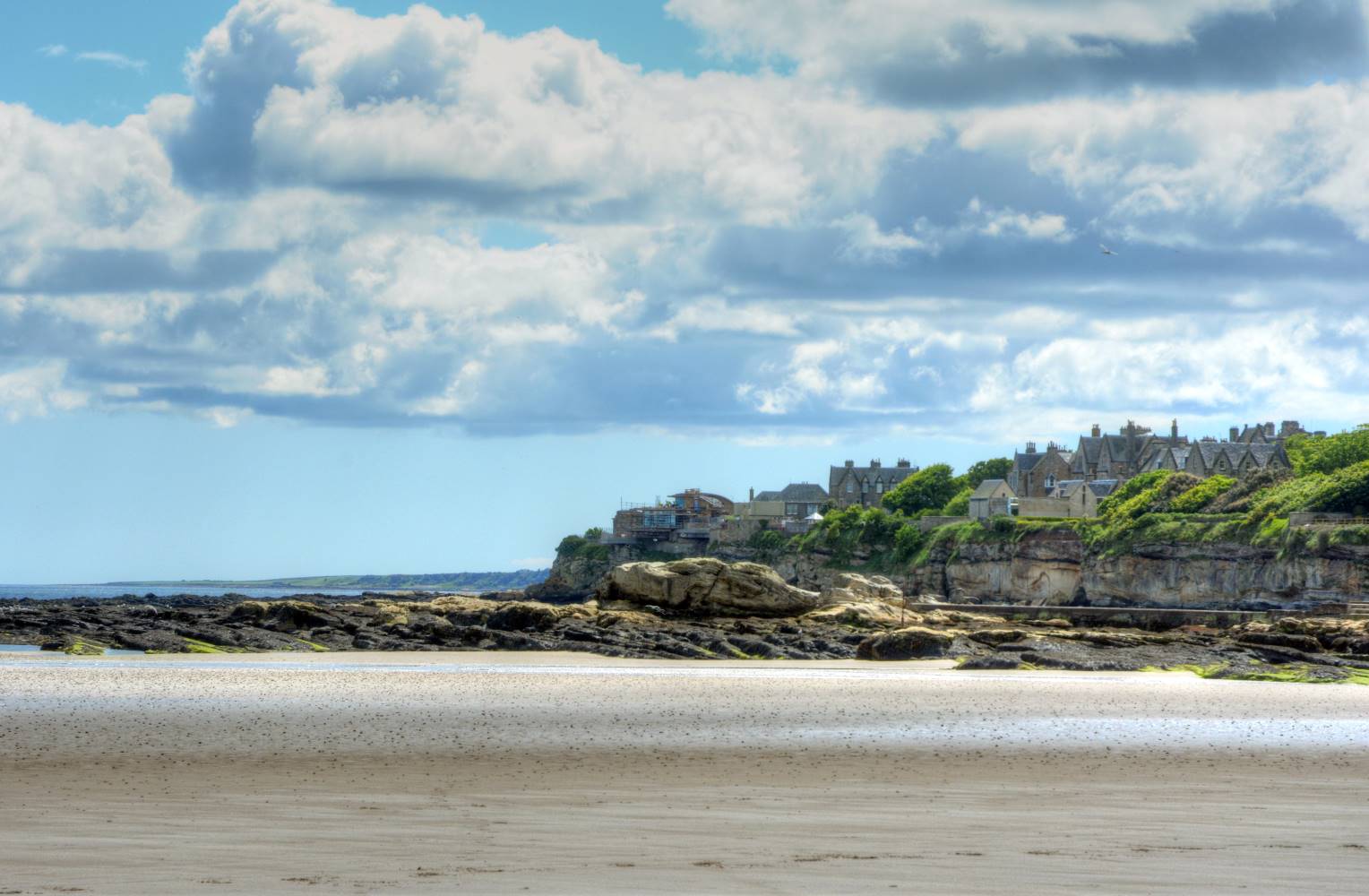 Where? Talisker on the West Coast of the Isle of Skye in the Inner Hebrides

This is a beautiful, small beach near the village of Talisker with views of the surrounding hills. On the northern side of the bay, you will find vertical cliffs and a waterfall, whilst the southern side is closed off by an impressive sea stack. 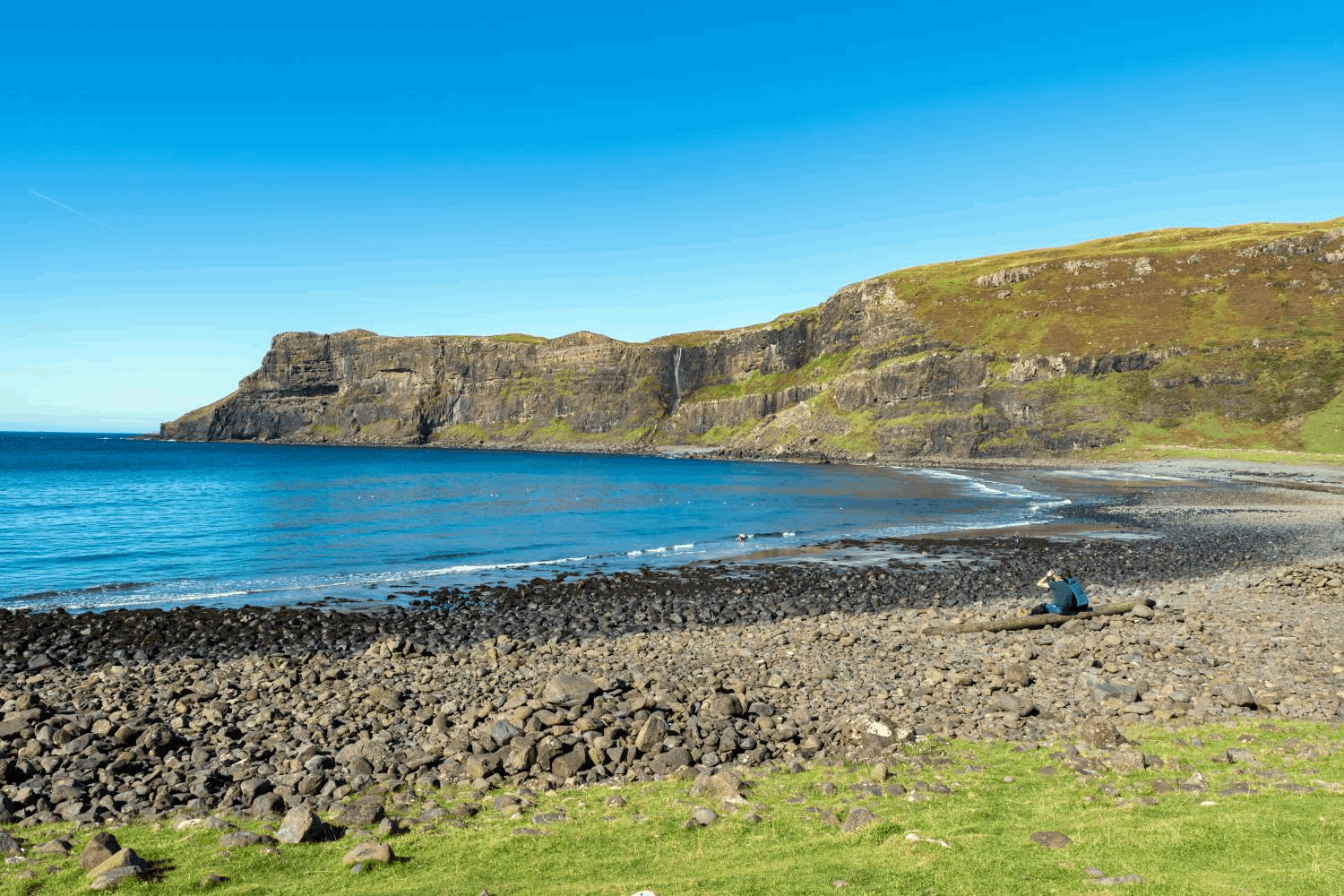 Where? Morar near Mallaig on the West Coast

Camusdarach Beach offers spectacular views to the Cuillins on the Isle of Skye, the blue peaks of Rum, and the sea cliff of Eigg. It simply is a breathtaking beach which with its white sands and clear blue waters forms part of a string of beaches called “the Silver Sands of Morar”. 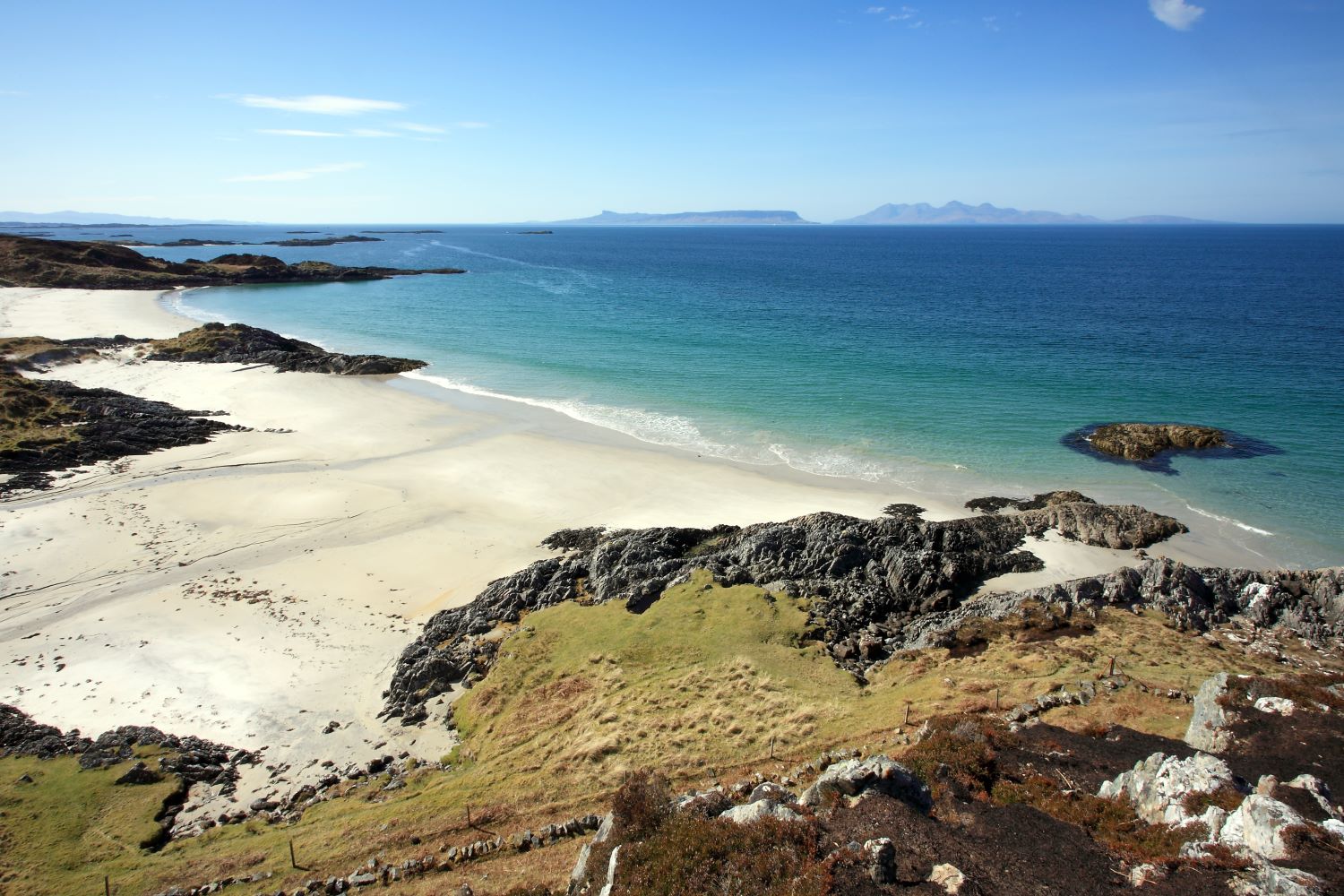 Where? Durness in the north-western Highlands on the North Coast

Sango Bay is known to be one of the most spectacular beaches in the Highlands. The beach is close to the famous Smoo Cave, the largest cave in Scotland that was formed by the sea and a river. Take a moment to appreciate its golden sands, rock formations, sand dunes while perhaps watching a few surfers in the water. 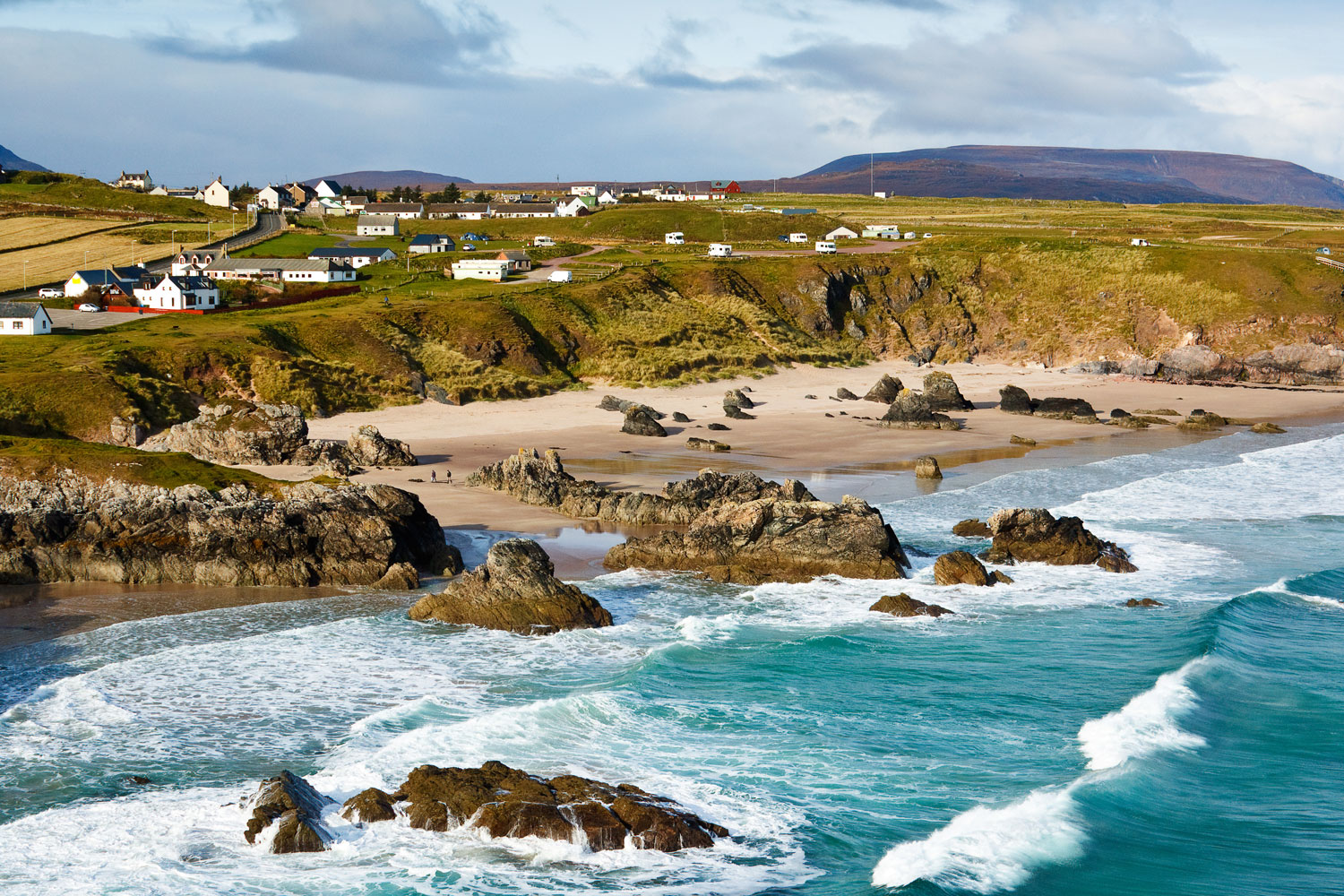 How will you celebrate Scotland’s Year of Coast and Waters? Dip a toe in the waters of Sango Bay while driving the North Coast 500, enjoy a romantic walk to the Duncansby Stacks on our Grand Tour of Scotland, or visit Calgary Bay as you set off on a Walking & Wildlife trip on Mull and Iona.